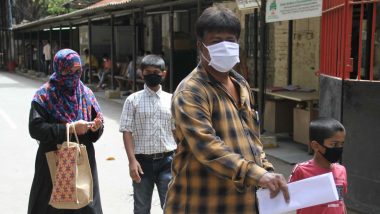 Mumbai, March 17: In a tragic incident, a 63-year-old COVID-19 patient, a Ghatkopar resident died at Mumbai's Kasturba hospital, thus bringing the total death toll in the country to three. The number of positive coronavirus cases in India has increased tremendously over the last few days. The Health Ministry on Tuesday morning confirmed that the total number of coronavirus positive cases in India has mounted to 126.

Maharashtra has become one of the worst-hit with 39 positive cases, including 3 foreigners. Kerala stands in second place with 22 confirmed COVID-19 cases in the country. Commenting on the death of the patient who died, Health Minister Rajesh Tope said, "He was admitted at Kasturba Hospital on March 5 and he had hidden some details from us, including that he had come from Dubai. But we grew suspicious on March 15."Coronavirus Outbreak: 63-Year-Old Doctor, Who Treated 76-Year-Old Patient Who Died, Tests Positive For COVID-19 in Karnataka.

Minister of Public Health & Family Welfare, Maharashtra on the death of 63-year-old male patient in Mumbai today: He was admitted at Kasturba Hospital on 5th March & he had hid some details from us, including that he had come from Dubai. But we grew suspicious on 13th March.(1/2) pic.twitter.com/8U4BhQHO0s

BMC confirmed the news and said that the patient who died had high blood pressure, pneumonia, inflammation of heart muscles and increased heart rate leading to death, and was also tested positive for COVID19. Speaking on this Tope said, "It is not possible to say now that the man who died at Kasturba Hospital today, died due to coronavirus. We are waiting for the report."

Fresh cases were reported from Karnataka and Haryana on Tuesday. The Karnataka Health Department confirmed earlier in the day two fresh positive cases from the state. According to an ANI tweet, one of the infected people is a 63-year-old doctor who treated the 76-yr-old man who died due to Coronavirus last week in India. The doctor along with his family has been kept in quarantine at his home. He will be sent to the isolation ward today.

After the death of the 76-year-old man who had a travel history to Saudi Arabia. India reported its second casualty due to coronavirus on March 14 with the health ministry saying a 68-year-old woman died in Delhi. The death was caused due to co-morbidity (diabetes and hypertension), in addition to being tested positive for coronavirus.

(The above story first appeared on LatestLY on Mar 17, 2020 01:29 PM IST. For more news and updates on politics, world, sports, entertainment and lifestyle, log on to our website latestly.com).