In a video that went viral on soil media, the tigress, aged about three years, is seen chasing tourists' jeep, with the driver frantically driving. 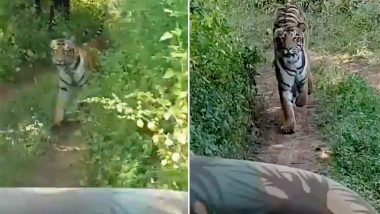 Chandrapur, November 13: A video of a tigress chasing a jeep carrying tourists at Maharashtra's Tadoba Andhari Tiger Reserve has surfaced, prompting the administration to issue strict warnings to visitors to keep a safe distance from tigers. The incident took place in the Agarzari area of the tiger reserve around 8 am on Sunday.

In a video that went viral on soil media, the tigress, aged about three years, is seen chasing tourists' jeep, with the driver frantically driving at high speed to escape. At one point, the animal appears just meters away. All tourists and driver fled safely. Following the incident, the road where the tigress charged at tourists was closed for safari rides. Avni Tigress Killing Case: T-1 Wasn't Shot Dead in Self-Defence, Reveals Post-Mortem Report.

"This particular tigress is known to have charged at tourist vehicle in the past as well. After the incident, a meeting of tourist guides and drivers was convened, where strict warnings were issued to keep a safe distance from tigers," Tadoba Andhari Tiger Reserve Field Director N R Pravin told a leading newspaper. Man-Eater Tigress Avni’s Killing: Violations of Guidelines Evident in Postmortem Report, Says Official.

Due to heavy tourism in

Speaking to news agency ANI, a forest officer reasoned that the tigress might have felt insecure, and chased tourists to drive them off her territory. Maharashtra has been witnessing a man-animal conflict in various parts of the state lately. An alleged man-eater tigress Avni, officially known as T-1, was killed by a sharpshooter recently on directions of the state government.

(The above story first appeared on LatestLY on Nov 13, 2018 12:51 PM IST. For more news and updates on politics, world, sports, entertainment and lifestyle, log on to our website latestly.com).