In a fresh turn of events, Rashtriya Kisan Mazdoor Sangathan and farmer leader Sardar VM Singh have withdrawn support from the ongoing farmers protests against the three farm laws. 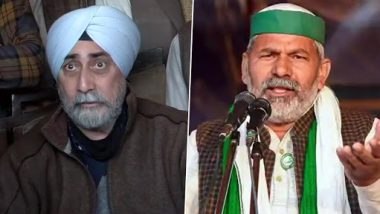 "I have nothing to do with the protest which is being led by them and over here being represented by Rakesh Tikait on their behalf", Singh said. He said the protest will continue until farmers get MSP guarantee but the protest will not go on in this form with him. "We have not come here to get people martyred or beaten up", Singh said. Who Are Deep Sidhu and Lakha Sidhana? Know About the Two Men Being Blamed by Farmer Leaders for Tractor Rally Violence and Hoisting Flag at Red Fort.

Meanwhile, Rakesh Tikait, the Bharatiya Kisan Union (BKU) spokesperson has been named among the farmer leaders who have been named in the FIR filed by Delhi Police. They have been named for the violence that broke out in various parts of the national capital during the farmers' tractor rally on Tuesday. The FIR charges them for breach of No Objection Certificate (NOC) issued regarding the rally.

On Republic Day 2021, the farmers' protest turned violent after the protestors deviated from the designated route for the proposed tractor rally. After a clash between the farmers and police at ITO where hundreds of protestors were seen chasing police personnel with sticks, ramming their tractors into the buses, they then reached Red Fort.

(The above story first appeared on LatestLY on Jan 27, 2021 05:05 PM IST. For more news and updates on politics, world, sports, entertainment and lifestyle, log on to our website latestly.com).