Who Are Deep Sidhu and Lakha Sidhana? Know About the Two Men Being Blamed by Farmer Leaders for Tractor Rally Violence and Hoisting Flag at Red Fort

The farmers protest that had been peaceful for the last two months turned violent on Republic Day after the protestors deviated from the designated route for the proposed tractor rally. However, the two names that have been making headlines include Deep Sidhu Sidhu and Lakha Sidhana. 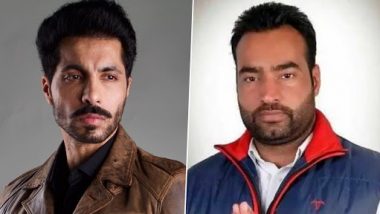 New Delhi, January 27: Chaotic scenes were witnessed in several parts of Delhi on Tuesday when India celebrated its 72nd Republic Day. The unruly situation in the national capital took place after a section of farmers protesting against the three farm laws, deviated from the planned route, thus resulting in clashes with cops. The farmers protest that had been peaceful for the last two months turned violent on Republic Day after the protestors deviated from the designated route for the proposed tractor rally.

Hundreds of protestors were seen with sticks, ramming their tractors into the buses after a clash between the farmers and police at Delhi's ITO. However, the two names that have been making headlines include Deep Sidhu Sidhu and Lakha Sidhana. These two men are being blamed by farmer leaders for tractor rally violence in Delhi and hoisting the flag at Red Fort. The religious and farmers' flag were hoisted on the Red Fort alongside the Tricolour. Farmers' Tractor Rally: Delhi Police to Hold Press Briefing, Security Tightened, Heavy Traffic Congestion as Many Roads Shut a Day After Red Fort Violence.

Who is Deep Sidhu?

Deep Sidhu is a Punjabi actor and a social worker. His career in films started with a debut in Ramta Jogi in 2015. Sidhu, the name that came up for the violence in Delhi, has been blamed of misleading the farmers and for the Red Fort incident. Farmer leaders, including Bharatiya Kisan Union (BKU) Haryana unit chief Gurnam Singh Chaduni, have distanced themselves from the violence alleged that Sidhu instigated the protesters and led them to the Red Fort. Soon after the Red Fort incident, Sidhu released a video on social media saying that the Nishan Sahib and Kisan Union flags were hoisted 'in a flow of emotions'. He said how can Deep Sidhu instigate such a huge crowd, adding that there will not be a single video of him leading anyone to Red Fort.

Reacting to allegations, the actor confirmed that although he was present at the rally but he did not remove the National flag. Deep Sidhu was an aide of actor Sunny Deol when Deol had contested from Gurdaspur seat in Punjab during 2019 Lok Sabha elections. Deol, who is now a BJP MP, had distanced himself from Sidhu in December 2020 after he joined the farmers' agitation.

The Congress and the AAP alleged that Sidhu is affiliated with BJP. During farmers protest, farmer unions used Sidhu's pictures with Prime minister Narendra Modi and Sunny Deol to show the link of BJP and RSS in protests—a claim which was later denied by Sidhu.

Who is Lakha Sidhana?

Lakha Sidhana's name has cropped up for playing a major role in instigating the violent clashes in Delhi on Republic Day. Sidhana is a gangster-turned-activist who has a number of cases registered against him in Punjab including one under Gangster Act. Lakhbir Singh, alias Lakha Sidhana, has been protesting with several farmers at the Singhu border in Delhi since November 2020. The cops are investigating Sidhana's role in the violence where he was allegedly mobilising the protesters for the tractor rally. Sidhana hails from  Bathinda in Punjab and has been a part of the farmers protest since the start. Sidhana was a part of the Punjab People’s Party (PPP) before becoming a social activist.

According to reports,  farmers protesting at Singhu border claimed it was Sidhu who climbed a pole and installed the flag beside the Tricolour at the Red Fort. Hundreds of farmers on their tractors with flags while 'Jai Jawan Jai Kisaan' echoed all around central Delhi, ultimately made their way to Red Fort after breaching all the barricades on the way. Sunny Deol and Several Farmer Leaders Distance Themselves From Deep Sidhu For the Red Fort Violence.

The farmers, who have been protesting for the past two months against the three Agricultural Laws, were allowed by the Delhi Police to take out the Kisan tractor parade on Republic Day 2021. The routes were already set for it. However, by not following the prescribed routes, the protesters reached the Red Fort and created mayhem after attacking the police. Leaders across the political spectrum also condemned the violence and the Red Fort incident.

The Delhi Police has detained 200 people in connection with the violence during farmers' tractor rally in Delhi on Tuesday. Reports inform that a total of 22 FIRs have been filed by the Delhi Police so far in connection with the violence witnessed during a farmers' tractor rally on the Republic Day. The FIRs were registered under IPC Sec 395 (dacoity), 397 (robbery, or dacoity, with attempt to cause death or grievous hurt), 120 b (punishment of criminal conspiracy) and other sections, regarding yesterday's violence. The Delhi Police said that the matter will be be investigated by Crime Branch.

(The above story first appeared on LatestLY on Jan 27, 2021 02:35 PM IST. For more news and updates on politics, world, sports, entertainment and lifestyle, log on to our website latestly.com).