Protesters have blocked the national highway in Dolubari and have set various vehicles on fire. They are protesting against the rehabilitation of Bru refugees from Mizoram in Tripura. Heavy security has been deployed in the area to control and pacify the situation. 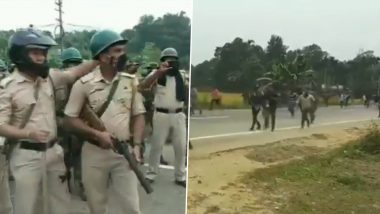 Dolubari, November 21: Demonstrators, on Saturday, held a protest in Tripura. They are protesting against the rehabilitation of Bru refugees from Mizoram in the state. Demonstrators blocked the national highway in Dolubari village of the North Tripura district. To control the situation  heavy security has been  deployed at the spot. India News | Indefinite Shut Down in Kanchanpur Against Resettlement of 6000 Bru Families.

In a video posted by the news agency ANI on Twitter, protesters can be seen running and agitating on the national high highway. Security forces, put in place to control the protest, have been firing tear gases to pacify the protesters in the Dolubari village, as can be seen in the video. India News | Man Assaulted During Strike, Section 144 Imposed in Tripura's Kanchanpur Sub-division.

#WATCH Locals protest against the rehabilitation of Bru refugees from Mizoram, in Dolubari village of North Tripura district, Tripura pic.twitter.com/CSz0cyH56C

Protesters have  set fire to the cars, trucks and other vehicles in the Dolubari village. They have also vandalised the property in the area. The police is trying to pacify the situation and bring it under control. Earlier this week, Kanchanpur district in Tripura had called for an indefinite shut down against the government's decision to settle Bru refugees from Mizoram in the state.

(The above story first appeared on LatestLY on Nov 21, 2020 02:40 PM IST. For more news and updates on politics, world, sports, entertainment and lifestyle, log on to our website latestly.com).