A dreaded criminal, who aspires to become a village pradhan, has allegedly distributed pamphlets in Uttar Pradesh's Khyala, warning residents of "dire consequences" if he is not elected unopposed. 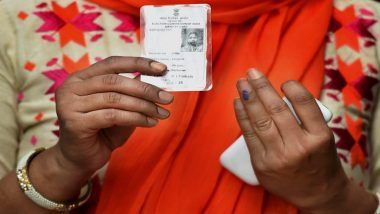 Lucknow, September 29: A dreaded criminal, who aspires to become a village pradhan, has allegedly distributed pamphlets in Uttar Pradesh's Khyala, warning residents of "dire consequences" if he is not elected unopposed. The pamphlet was found at every doorstep in Khyala village on Saturday morning, which led to panic among villagers. The pamphlet carried a picture criminal Ankit alias Baba who carries a reward of Rs 25,000. UP Govt Succeeds in Instilling Fear in Criminals' Minds Through Technology: Adityanath.

Titled "appeal", the pamphlet read: "I, Ankit alias Baba, request all villagers that I want village headmanship (village pradhan post) unopposed. In case you don’t understand the request, there will be consequences. If I get to know about anyone (contesting polls), he will meet the same fate as Vinod. Let alone filing nomination, nobody would be allowed to move beyond the village canal. Thank you."

Vinod Kumar was killed in broad daylight in July 2015 after he lost the panchayat elections. Frightened villagers informed police about the "warning" after which a First Information Report (FIR) was filed against Ankit on Saturday. The criminal, already faces more than a dozen cases in Uttar Pradesh, Delhi and Haryana, has been booked under Section 506 (criminal intimidation) of the Indian Penal Code.

"There is an atmosphere of panic in the village. Gangsters are throwing the gauntlet and the police force is merely telling us that they’re trying their best," Manoj Kumar, the brother of deceased Vinod, told TOI. In Uttar Pradesh, panchayat and village pradhan elections will be held in January 2020.

(The above story first appeared on LatestLY on Sep 29, 2019 06:05 PM IST. For more news and updates on politics, world, sports, entertainment and lifestyle, log on to our website latestly.com).