After remaining in the denial mode for 14 months, former Bollywood actress Urmila Matondkar will finally join the Shiv Sena on Tuesday, a senior aide to Chief Minister Uddhav Thackeray said here on Monday. 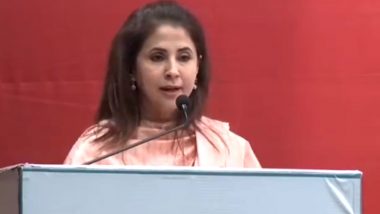 From September 2019 till November 30 evening, Matondkar, 46, had categorically denied that she was planning to join the Shiv Sena, though strong speculation reigned in political and media circles.

"Very late last night things were finalized and she will join the Shiv Sena formally in presence of party president and CM Thackerayji on Tuesday," the CM's aide Harshal Pradhan told IANS.

Shiv Sena MP and Chief Spokesperson Sanjay Raut also said on Monday that "she is already a Shiv Sainik, just wait for the formal announcement" to a barrage of questions by the media.

In anticipation of her move, the Maha Vikas Aghadi (MVA) earlier this month submitted Matondkar's name along with 11 others, to Raj Bhavan for nomination to the Maharashtra Legislative Council from the Governor Bhagat Singh Koshyari's quota.

This will be Matondkar's second party after she left the Congress in a huff on September 10 last year, post-defeat in the 2019 Lok Sabha elections at the hands of Bharatiya Janata Party's Gopal Shetty in Mumbai North constituency.

In fact, prior to the October 2019 Maharashtra Assembly polls, there was intense speculation that she would join the Sena, Sharad Pawar's Nationalist Congress Party or even Raj Thackeray's Maharashtra Navnirman Sena, but she had scoffed it as rumours.

A couple of months ago, she and actress Kangana Ranaut were engaged in a war of words after the latter made certain remarks on targetting Matondkar on the social media.

(The above story first appeared on LatestLY on Nov 30, 2020 01:13 PM IST. For more news and updates on politics, world, sports, entertainment and lifestyle, log on to our website latestly.com).