Two decomposed bodies were fished out from the Ganga canal at two separate locations in Uttar Pradesh's Muzafffarnagar on Wednesday. 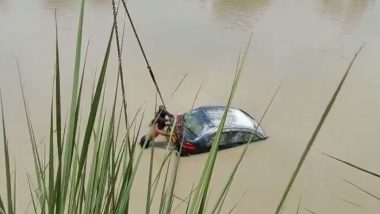 Car being pulled up from Ganga canal in Muzaffarnagar (Photo Credits: Twitter)

Muzaffarnagar, June 23: Two decomposed bodies were fished out from the Ganga canal at two separate locations in Uttar Pradesh's Muzafffarnagar on Wednesday. Both bodies were found inside two cars that surfaced during a desilting process when the water level in the canal went down. According to the police, the two bodies have been identified and further investigation was underway. UP Shocker: Two 11-Year-Old Boys Tied to Tree, Beaten Mercilessly for Plucking Jamuns from Tree in Lakhimpur Kheri; Accused Arrested.

One of the bodies is of Dilshad Ansari, according to a report by NDTV. He was 27. His body was found in the backseat of the car. A resident of Baghra area in Muzaffarnagar, Ansari had been missing since early this year. Police have so far found that prior to his disappearance, Ansari had taken his friend’s car to go somewhere but never returned. A missing person's complaint was also lodged at the New Mandi police station by his brother Wajid Ansari. Muzaffarnagar District Jail Head Warden Suspended After Prisoner Found Dead.

Visuals from the sport showed a carne lifting the car from the canal. The report said the second body is of Harendra Dutt Atre. His body was found 55 km away from the spot where Ansari's body was found. Atre had been missing since February. He had left home at 7 pm to go to Meerapur for some work, but never never came back home. A missing person’s complaint was lodged by the family in Kotwali.

2 Bodies in 2 Cars Recovered From Ganga Canal in UP's Muzaffarnagar:

… and this is car no 2 . The police says both bodies have been identified and in both cases missing person complaints had been filed … pic.twitter.com/UwdhmsFrrS

A video from the sport where Atra's body was found showed a mangled white car and a posse of policemen around it. "The family has been informed after identifying the body. Further investigation is being conducted and action will be taken accordingly,"  Deputy Superintendent of Police Himanshu Gaurav was quoted as saying.

(The above story first appeared on LatestLY on Jun 23, 2021 12:26 PM IST. For more news and updates on politics, world, sports, entertainment and lifestyle, log on to our website latestly.com).