Official sources said that the swearing-in ceremony is likely to be held in the Ekana stadium with the list of invitees running into several thousands. 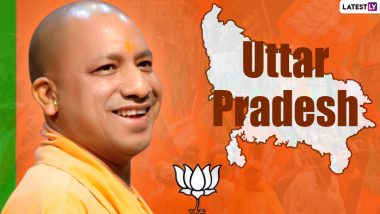 Lucknow, March 18: The Bhartiya Janata Party (BJP) is planning a grand swearing-in ceremony for Yogi Adityanath, who will take over as chief minister for a second consecutive term next week.

Official sources said that the swearing-in ceremony is likely to be held in the Ekana stadium with the list of invitees running into several thousands. Hindu Residents Threatened by Mob of Muslims To Sell Their Flats in Bhavnagar? Here’s a Fact Check of the Fake News Going Viral.

The party is preparing a list of invitees for the event and the guests will include beneficiaries of various government schemes - known as 'labharti'- who have played a crucial role in voting the BJP back to power.

Arrangements are also being made for around 200 VVIPs at the stadium.

Prime Minister Narendra Modi, BJP national president J.P Nadda, Union Ministers Rajnath Singh, Amit Shah and others, chief ministers of BJP-ruled states and some prominent leaders, including from the opposition, will be invited.

Officials supervising the preparations said that the ceremony would be 'unmatched' in style and grandeur.

The BJP has retained power for the second consecutive term in Uttar Pradesh, winning 255 seats in the 403-member Legislative Assembly.

(The above story first appeared on LatestLY on Mar 18, 2022 03:03 PM IST. For more news and updates on politics, world, sports, entertainment and lifestyle, log on to our website latestly.com).