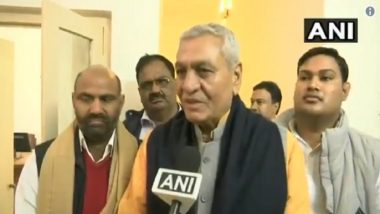 Lucknow, June 20: Uttar Pradesh cabinet minister Laxmi Narayan Chaudhary on Saturday asserted that ‘the cow, Ganga and Gita' are the identity of India and it is because of these three entities that the country became a world leader. He also accused the previous governments of not making any efforts to stop cow slaughter in the state.

"The cow, Ganga and Gita are the identity of India. It is because of them that India became a vishwa guru (world leader),” Chaudhary, who is the state's dairy development, animal husbandry and fisheries minister, told PTI. “When there were no buffaloes in our country, there were only cows. Even doctors say that after mother's milk, it is the milk of an Indian cow which is the best for a newborn baby," he added.

On the need for a stringent law to protect cows and prevent their slaughter, Chaudhary, while referring to draft of the Uttar Pradesh Cabinet Cow Slaughter Prevention (Amendment) Ordinance, 2020 said, "There were a large number of cases of cow slaughter during the tenure of previous governments. But they did little to curb the crime." Hanuman Was Jaat, Says UP Minister Laxmi Narayan Chaudhary.

"Earlier, it was a bailable offence and barely within a couple of days, the accused persons could get bail," he said. The minister, however, stressed that the ordinance was not targeted towards any particular religion.

"This step of the UP government cannot be linked to any particular religion. This is a matter of cow protection, belief and health. I had once seen 30 cows loaded in a truck and by the time they were rescued, three had died. Cow slaughter is a heinous crime. We had to bring this ordinance, so that cow slaughter comes to an end," he said.

On June 9, the Uttar Pradesh government approved the draft ordinance, providing a maximum rigorous imprisonment of 10 years and a fine up to Rs 5 lakh to protect cows and prevent their slaughter.

For the first offence, a person can be given a rigorous punishment of one to seven years with a fine ranging from Rs 1 lakh to Rs 3 lakh. For the second offence, the person can be awarded 10-year rigorous imprisonment with a fine up to Rs 5 lakh, the state government said.

The state cabinet had cleared the draft of the ordinance at a meeting chaired by Chief Minister Yogi Adityanath. The ordinance aims at making the existing law (Uttar Pradesh Prevention of Cow Slaughter Act, 1955) more robust and effective and to completely stop the incidents pertaining to cow slaughter, the UP government statement had said.

In case of the illegal transportation of cows and other bovines, the driver, operator and the owner of the vehicle shall be charged under the new Act, unless proven that the transportation was done without the owner's knowledge by someone else for committing the crime.

"However, certain loopholes continued to remain due to which the Act could not be effectively implemented as per the public sentiment and complaints of illegal cow slaughter and transportation of cattle were received," the statement said.

"In the 1955 Act, there is a provision of maximum seven years of punishment in incidents of cow slaughter. People getting bail in such incidents were also increasing. Incidents of people involving in the incident after getting bail from the court were coming to the fore," it said.

"Keeping these reasons in mind, and respecting the public sentiment, it became necessary that the Act be strengthened, and made more robust and effective,” it added.