Uttar Pradesh: Probe Ordered Into Role of Cops in Honour Killing of 20-Year-Old Woman Outside Police Station in Badaun

A probe has been ordered into the role of police personnel in the honour killing of a 20-year-old woman, who had eloped and married her boyfriend. The woman was stabbed in the chest and her throat slit open by her brothers right outside the police station. 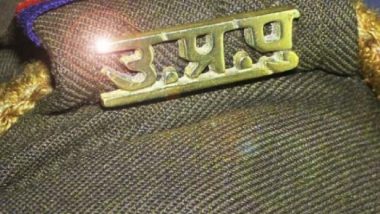 Badaun, July 30: A probe has been ordered into the role of police personnel in the honour killing of a 20-year-old woman, who had eloped and married her boyfriend. The woman was stabbed in the chest and her throat slit open by her brothers right outside the police station. The brothers, who have been arrested, told the police that she had brought dishonour to the family.

Badaun SSP Sankalp Sharma said that, "We are looking into the role of the investigating officer and other cops at the police station. Who leaked the information to the girl's family that the couple was coming to the police station is very important?" Uttar Pradesh: Police Officer Suspended for Making Casteist Slur Against ASP in Chandauli.

Archana Yugal, a BA student, belonged to a prominent farmers' family in Palia Gujar village in Badaun. Archana's father's cousin, Devendra Kumar, who lived in the same village, would often call on her family. They fell in love but the relationship was taboo. Archana and Devendra eloped on June 22 and got married in Bareilly in a temple.

On June 30, her elder brother Ravit Kumar filed a complaint at the Dataganj police station against Devendra and three of his family members, accusing them of abduction. Archana and Devendra sought protection from the Allahabad high court and their plea was granted.

SSP Sankalp Sharma said, "We did not receive the high court order but the couple informed the local police about it. They said they wanted police protection. That is why they were asked to come to the police station." In the intervening night of Wednesday and Thursday, the couple went to the Dataganj police station, ostensibly to save themselves from the eyes of their families.

But her brothers, father and his twin brother were lying in wait and before the couple could realise what was happening, her brothers, Ravit and Pushpendra, stabbed her in the chest and slit her throat. Devendra was rescued by the police. "We have ensured Devendra's security and Ravit and Pushpendra have been arrested from the spot with the murder weapon," the SSP said.

(The above story first appeared on LatestLY on Jul 30, 2021 09:29 AM IST. For more news and updates on politics, world, sports, entertainment and lifestyle, log on to our website latestly.com).