SP Singh said Akshay had assaulted the police personnel due to which there was chaos in the camp. A report was filed against Akshay at the Binauli police station for obstructing government work as well as for assault. Later, he ended his life by suicide, the SP said. 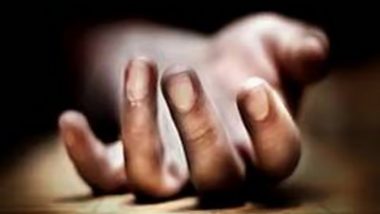 Baghpat, July 27: A 22-year-old man ended his life by hanging after his mother was allegedly roughed up and their house ransacked by police, following a brawl at a Covid vaccination camp in Ranchhad village here. Superintendent of Police, Baghpat, Abhishek Singh said 10 policemen of Binauli police station have been relieved of their duties and attached to police lines.

Akshay, a son of a local RSS leader, had taken his mother (62) to a vaccination centre to get her vaccinated against COVID-19 on Monday. He wanted to get her the jab first instead of standing in queue, citing her age. This led to an altercation with police, his family members said.

A policeman allegedly slapped Akshay and got into a scuffle, they said.

The vaccination camp was organised by the Health Department in a primary school in Ranchhad village. Later, policemen raided Akshay's house and broke chairs and a window of the car and also vandalised a tractor, the family said. Uttar Pradesh Shocker: 60-Year-Old Woman Allegedly Gangraped, Chilli Powder Rubbed in Her Private Parts in Mahoba District; Two Accused Arrested.

When the women of the house protested, they were insulted. Akshay's mother Madhu, her sister-in-law Kamlesh and one Dharamveer Singh of the village were taken into custody and brought to the police station. A case was filed against Akshay, they alleged. Upset over this, Akshay allegedly committed suicide by hanging himself, the family said.

After the news of the suicide reached the villagers, they held a demonstration demanding that a case be lodged against policemen. It was only after senior police officials pacified them that they allowed police to take the body for post-mortem at around 7.30 am on Tuesday.

SP Singh said Akshay had assaulted the police personnel due to which there was chaos in the camp. A report was filed against Akshay at the Binauli police station for obstructing government work as well as for assault. Later, he ended his life by suicide, the SP said. Uttar Pradesh Shocker: Woman's Nose Cut Off Due to Business Rivalry in Kanpur.

On the basis of the complaint given by the family members at Binauli police station, an FIR was lodged and 10 policemen were attached to police lines with immediate effect, he said. The investigation into the incident is underway, the SP said. Policemen in large numbers have been deployed in the village to maintain law and order.

In a similar incident, five people, including a doctor, were injured when a clash broke out between two groups over COVID-19 vaccination in the Sukhpura area of Ballia district on Monday, according to police.