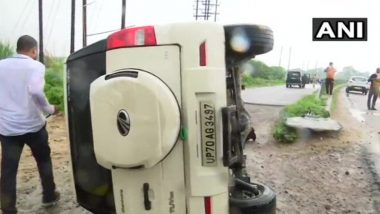 One of the Vehicles of Convoy of UP Special Task Force Bringing Back Vikas Dubey Overturns (Photo Credits: ANI)

Kanpur, July 10: One of the vehicles of the convoy of Uttar Pradesh Special Task Force (STF) that was bringing back gangster Vikas Dubey from Madhya Pradesh to Kanpur overturned. According to an ANI update, the police is at the spot. More details regarding this news are awaited.  Uttar Pradesh STF team along with gangster and the prime accused behind the Kanpur encounter case Vikas Dubey was on their way to Kanpur on Friday morning after being arrested in Ujjain.

He got arrested from Mahakal temple in Ujjain on Thursday around 8.30 am. Reportedly, the UP gangster had stayed in Noida for two days after killing eight police officers in Kanpur. He spent a night in Kota and then reached Ujjain early morning. Several theories are floating on social media regarding his arrest. Madhya Pradesh Police List Sequence of Events Leading to Arrest of Notorious Gangster at Ujjain's Mahakal Temple.

One of the Vehicles of Convoy of UP Special Task Force Bringing Back Notorious Gangster From MP to Kanpur Overturns:

Kanpur: One of the vehicles of the convoy of Uttar Pradesh Special Task Force (STF) that was bringing back #VikasDubey from Madhya Pradesh to Kanpur overturns. Police at the spot. More details awaited. pic.twitter.com/ui58XBbd82

After his arrest, Madhya Pradesh Chief Minister Shivraj Singh Chouhan spoke to Uttar Pradesh Chief Minister Yogi Adityanath regarding the handover of the notorious gangster to UP on Thursday. Chouhan had also mentioned that people taking refuge of Mahakal can't get away by doing any crime. Commenting on his arrest, his mother Sarla Devi said that she found out about his son's arrest from the television. Dubey is the prime accused behind the Kanpur encounter in which 8 policemen were killed and others were injured.

(The above story first appeared on LatestLY on Jul 10, 2020 07:45 AM IST. For more news and updates on politics, world, sports, entertainment and lifestyle, log on to our website latestly.com).