Ujjain Superintendent of Police Manoj Kumar Singh said the owner of the shop from where Vikas Dubey bought flowers had identified him. 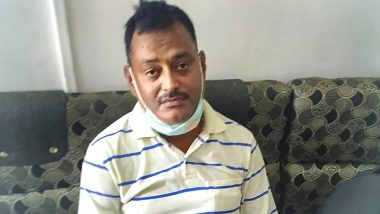 Ujjain, July 8: After the dramatic arrest of notorious gangster Vikas Dubey, accused of killing eight policemen during an encounter in Kanpur, from the Mahakal temple in Ujjain early on Thursday morning, the Madhya Pradesh police revealed how the events unfolded. Addressing a press conference, Ujjain Superintendent of Police Manoj Kumar Singh said the owner of the shop from where Vikas Dubey bought flowers had identified him. Vikas Dubey Arrested: From Kanpur Shootout to Gangster's Ujjain Temple Visit, Timeline of The Case.

"Today Vikas Dubey reached Mahakal temple. He purchased flowers and prasad from a shop. The owner had seen him on TV and suspected him to Dubey. He called up the private security agency at the temple and informed them," SP Manoj Kumar Singh told reporters. The police came to know about Dubey's presence at the temple through personnel of the security agency deployed at the temple. Vikas Dubey Arrested: Gangster Confirms His Identity After Being Held in Ujjain, Says 'Main Vikas Dubey Hoon, Kanpur Wala' (Watch Video).

When he entered, pvt security jawans informed our officials at Mahakal Chowki & started talking to him & asked his name. He gave them a false name but later gave his correct name. He was taken to Police station. We reached there & interrogated him seriously: Ujjain SP Manoj (2/3)

"When he entered, private security agency's jawans informed our officials at Mahakal Chowki and started talking to him. They asked him his name. He gave them a false name, but later gave his correct name. He was taken to Police station where we interrogated him seriously," the senior cop said. He added that the Ujjain police sought a picture of Dubey from the Uttar Pradesh STF to confirm his identity.

SP Singh said that his officers ensured that all paper works are done properly regarding Dubey's handover to the Uttar Pradesh police. The Special Task Force (STF) of Uttar Pradesh Police took custody of Dubey in Ujjain and flew back to Lucknow by a chartered flight, according to reports. "Had there been even a little mistake, he (Vikas Dubey) could have left Ujjain after darshan at the temple," the SP said.

Dubey, accused of killing eight policemen in Bikaru village of Kanpur, had been absconding for the past seven days. Questions have been raised whether he came on his own or was brought here, and also as to how he managed to cross many districts of Uttar Pradesh without being recognised.

(The above story first appeared on LatestLY on Jul 09, 2020 09:32 PM IST. For more news and updates on politics, world, sports, entertainment and lifestyle, log on to our website latestly.com).