Weather Forecast: 'Hailstorm Likely Over Assam and Meghalaya on April 27' Says IMD; Heatwave To Prevail Over Central Maharashtra and Chhattisgarh

IMD in its daily weather bulletin said that light isolated rainfall with dust storms or thunderstorm is likely over Punjab, Haryana, Chandigarh, Delhi, Uttar Pradesh, and Rajasthan on April 29. 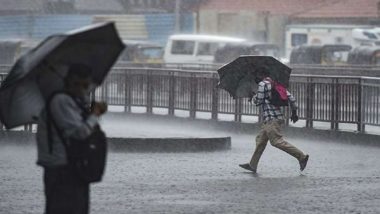 Mumbai, April 27: The India Meteorological Department (IMD) on Wednesday said that widespread rainfall with a thunderstorm, lightning and gusty winds with speeds reaching 40-50 kmph is very likely over Arunachal Pradesh, Assam-Meghalaya, and isolated or scattered rainfall is likely over Nagaland-Manipur, Mizoram-Tripura, Sub-Himalayan West Bengal, and Sikkim during next the 5 days.

Besides, the IMD in its daily weather bulletin said that light isolated rainfall with dust storms or thunderstorm is likely over Punjab, Haryana, Chandigarh, Delhi, Uttar Pradesh, and Rajasthan on April 29.

"Due to the influence of a fresh western disturbance, light or moderate isolated to scattered rainfall accompanied with isolated thunderstorm or lightning is very likely over Jammu and Kashmir, Ladakh, Gilgit-Baltistan and Muzaffarabad, and Himachal Pradesh during April 28-30, and May 1; over Uttarakhand on April 29 and 20 and May 1 even as isolated hailstorm is also likely over Jammu and Kashmir on April 28," the IMD daily forecast read.

While strong dust-raising winds with speeds reaching 25-35 kmph are very likely over Rajasthan from April 27-29, the weather bureau has also forecasted heatwave conditions in isolated pockets of Odisha and Vidarbha in Maharashtra for the next five days.

In a smiliar way, it has stated that heatwave conditions would prevail in isolated pockets over Bihar and Sub-Himalayan West Bengal on April 27; over Jharkhand, Gangetic West Bengal till April 29; eastern parts of Gujarat, Rajasthan, Uttar Pradesh, Madhya Pradesh during April 27-30; Punjab, Haryana, Chandigarh, Delhi, central Maharashtra and Chhattisgarh during April 28-30 and Telangana on April 27 and 28.

The maximum temperatures are likely to increase by 2-3 degrees over Gujarat, and Maharashtra during the next 4-5 days, while light isolated to scattered rainfall is likely over the Western Himalayan Region and adjoining plains of northwest India from May 2- 4.

(The above story first appeared on LatestLY on Apr 27, 2022 10:51 AM IST. For more news and updates on politics, world, sports, entertainment and lifestyle, log on to our website latestly.com).