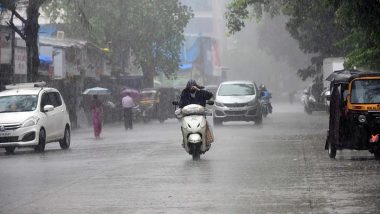 India is expected to get some relief from the heatwave as maximum temperature is expected to drop by 2-4 degrees celsius in several states over the next three days, the India Meteorological Department (IMD) said in its latest weather forecast.

After being parched by a searing heatwave for six successive days, overcast skies and a light breeze brought much-needed relief to the people of of the odisha on Sunday even as temperatures were high in the western region of the state, the India Meteorological Department said. Heatwave in Uttar Pradesh: Banda Records Highest Maximum Temperature of 47.4 Degrees Celsius

As per the IMD, heatwave conditions are likely to continue over Northwest and Central India till May 2 and abate thereafter. As a result, states and union territories like Delhi, Haryana, Chandigarh, and Punjab are likely to experience dust storms and thunderstorms on May 3 and May 4. Uttar Pradesh will experience similar weather conditions from May 2 to May 4, whereas in Rajasthan, the thunderstorm/ dust storm is likely to occur on May 2 and May 3, respectively. Weather Forecast: Intense Heatwave to Continue in Rajasthan, Madhya Pradesh; Light Rainfall Likely in Assam, West Bengal

As per the IMD forecast, there will be a formation of a low-pressure area over the south Andaman Sea around May 5. Therefore, northeast India may experience rainfall until May 4. Assam, Meghalaya, Nagaland, Manipur, Mizoram, and Tripura will witness heavy rainfall from May 2 to May 4.

Further, the Meteorological department has predicted a cyclonic circulation over South Andaman Sea and neighbourhood around May 4. "Heavy rainfall at isolated places over Andaman & Nicobar Islands on 05 May. Squall wind (speed reaching 40-50 kmph gusting to 60 kmph) is likely over southeast Bay of Bengal & adjoining South Andaman Sea on May 5 and 6," IMD added.

And, under the influence of a western disturbance as a trough in mid and upper tropospheric westerlies, light to moderate isolated rainfall accompanied by thunderstorms and lightning are likely to occur over Jammu and Kashmir, Ladakh, Himachal Pradesh, and Uttarakhand in the next two days.

In addition to this, isolated hailstorms may also occur over Jammu and Kashmir on May 3 and over Uttarakhand and Himachal Pradesh on May 3 and 4. Delhi, Punjab, Haryana, Uttar Pradesh, and Chandigarh could experience dust storms, thunderstorm, lightning, and gusty winds (speed reaching 40-50 kmph) during the next few days.

(The above story first appeared on LatestLY on May 02, 2022 10:07 AM IST. For more news and updates on politics, world, sports, entertainment and lifestyle, log on to our website latestly.com).