The weather bureau said that the maximum temperatures in Madhya Pradesh and Maharashtra are likely to increase by 2-4 degrees for the next 3 days. 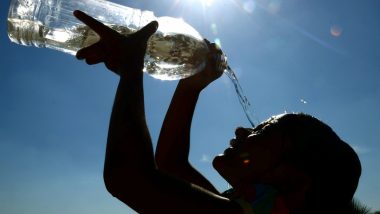 Mumbai, April 26: After Delhi, Gurgaon, and other parts of the National Capital Region (NCR) witnessed dust storm, the India Meteorological Department (IMD) said that strong surface winds with speeds reaching 25-35 kmph is very likely over Punjab, Haryana, Chandigarh, Delhi, West Rajasthan from April 28-30, and over East Rajasthan, and Uttar Pradesh on April 29 and 30.

The IMD in its daily weather bulletin also said that thunderstorms with lightning and gusty winds with speeds reaching 30-40 kmph at isolated places are very likely over Arunachal Pradesh, Assam, Meghalaya, Nagaland, Manipur, Mizoram, and Tripura during the next 2 days. Dust Storm in Delhi, Gurugram and Other Parts of NCR; Netizens Share Videos.

The maximum temperatures are likely to increase by 2-3 degrees over most parts of Northwest India, and East India during the next 2 days. However, the weather bureau said that the maximum temperatures in Madhya Pradesh and Maharashtra are likely to increase by 2-4 degrees for the next 3 days. Weather Update: Jammu and Kashmir, Ladakh To Remain Dry During Next 24 Hours, Says IMD.

Predicting weather from May 1- 3, the IMD said that widespread to widespread moderate rainfall is likely to continue over Northeast India, Sub Himalayan West Bengal-Sikkim, and isolated to scattered light rainfall over East India, south peninsular India, and Islands.

(The above story first appeared on LatestLY on Apr 26, 2022 10:35 AM IST. For more news and updates on politics, world, sports, entertainment and lifestyle, log on to our website latestly.com).