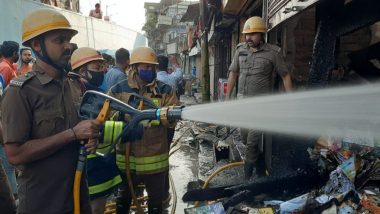 West Bengal, June 2: A total of seven shops have been completely gutted in a fire which broke out at DI Fund Market near Siliguri Police Station, in Siliguri. According to an ANI update, four fire tenders were present in order to combat the raging flames. Fire fighting operations are underway. There have been no reports of any casualties till now. More details on this are awaited. The cause of the fire is still to be ascertained.

In the month of March, a fire broke at a furniture market in Delhi’s Shaheen Bagh. A thick envelope of smoke engulfed the area. According to reports, four fire tenders had reached the spot to douse the flames. Fire Breaks Out at Market in IIT Kharagpur Campus in West Bengal, 13 Shops Gutted; See Pics and Video.

In April, a massive fire broke out at a market in Indian Institute of Technology Kharagpur (IIT Kharagpur) in West Bengal. The massive fire damaged at least 13 shops in the locality. Fire engines rushed to the spot, but several shops were already gutted by that time.

(The above story first appeared on LatestLY on Jun 02, 2020 07:23 AM IST. For more news and updates on politics, world, sports, entertainment and lifestyle, log on to our website latestly.com).