The slogan Khela Hobe was made popular by Banerjee during her election campaign for the recently concluded Assembly elections in which the Trinamool Congress cruised to a landslide victory by bagging 213 seats. 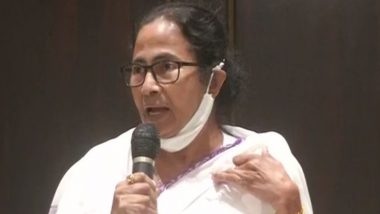 Kolkata, July 6: To commemorate the 'Khela Hobe' (Game is On) slogan that modulated the election campaign sloganeering during the recently-concluded Assembly polls in West Bengal, Chief Minister Mamata Banerjee on Tuesday announced on the floor of the Assembly that a 'Khela Hobe Diwas (Day) will be observed in Bengal. Though she didn't mention any particular date to celebrate the Khela Hobe Diwas, the Chief Minister promised to distribute 50,000 footballs on that day.

"People have appreciated 'Khela Hobe', so we will have 'Khela Hobe Diwas'," Banerjee said during the ongoing Budget Session of the West Bengal Assembly.

During her poll campaign, Banerjee had promised to distribute footballs among the clubs and school students and was often seen throwing footballs towards the crowd as part of populariing the 'Khela Hobe' campaign. Congress Mocks New Governor Appointments, Asks 'Have They Changed West Bengal Governor?'.

The slogan Khela Hobe was made popular by Banerjee during her election campaign for the recently concluded Assembly elections in which the Trinamool Congress cruised to a landslide victory by bagging 213 seats.

The popular slogan that caught the fancy of the voters in Bengal has been swiftly adopted by the workers of the Samajwadi Party in Uttar Pradesh, who have painted its Bhojpuri version -- 'Khela Hoi' -- on the walls of several cities across the state.

Though Trinamool youth leader Debangshu Bhattacharya wrote the lyrics for the Khela Hobe campaign, the slogan was coined by Bangladesh's Awami League MP Shamim Osman a few years ago.

In West Bengal, it was popularised by Trinamool's Birbhum district president Anubrata Mondal, who at a local event had said, 'Khela hobe. Bhoyonkor khela hobe. Ei maati tei khela hobe' (The game will happen. It will be a dangerous game. The game will be played in this battleground).

The state's Sports and Youth Affairs Department has already brought out a notification regarding the launch of the Khela Hobe programme through which footballs will be distributed to the registered clubs.

'Joyee' footballs that are being manufactured by Refugee Handicrafts under the Micro Small and Medium Enterprises and Textiles Department will be distributed to the clubs. The department keeps distributing different sports gears, including for indoor games, round the year.

(The above story first appeared on LatestLY on Jul 06, 2021 09:31 PM IST. For more news and updates on politics, world, sports, entertainment and lifestyle, log on to our website latestly.com).