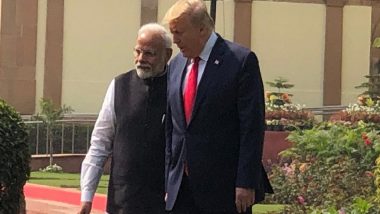 Washington, April 29: Less than three weeks after the White House began following Indian Prime Minister Narendra Modi on Twitter, the epicentre of American administration has now unfollowed him. Apart from Modi, those who have been unfollowed by the White House includes the handles of President Ramnath Kovind, India's Prime Minister's Office (PMO), the Indian Embassy in US and the US Embassy in India. Trump Thanks PM Modi for Hydroxychloroquine Export to US, Says 'Your Leadership Helping Humanity'.

The Indian side is yet to react on the decision taken by White House, which critics on social media are linking to an alleged diplomatic failure. Notably, the accounts of India's top political leadership were followed by the epicentre of American administration on April 10.

Congress, the country's top Opposition party, jabbed PM Modi on being unfollowed by the White House despite close ties with his "friend" and US President Donald Trump.

Govt owes an explanation to people!

Modi being included in the list of 19 handles followed by the White House, earlier this month, had drawn headlines across the world. No other world leader was being followed by the social media handle that disseminates the official statements and views of those at the helm of the American administration.

The following of Modi by the White House was also considered as the furthering of his bonhomie with Donald Trump. The former was followed on Twitter shortly after he approved the export of hydroxychloroquine (HCQ) to the United States on the request of Trump.

The anti-malarial drug, manufactured largely in India, was then being promoted by the American President as a "game-changer" in the fight against coronavirus. After Modi had approved the export of 35.82 lakh tablets of HCQ to the US, he was referred to as "leader of humanity" by Trump.

"Extraordinary times require even closer cooperation between friends. Thank you India and the Indian people for the decision on HCQ. Will not be forgotten! Thank you Prime Minister Narendra Modi for your strong leadership in helping not just India, but humanity, in this fight," the President had then said.

(The above story first appeared on LatestLY on Apr 29, 2020 11:31 AM IST. For more news and updates on politics, world, sports, entertainment and lifestyle, log on to our website latestly.com).