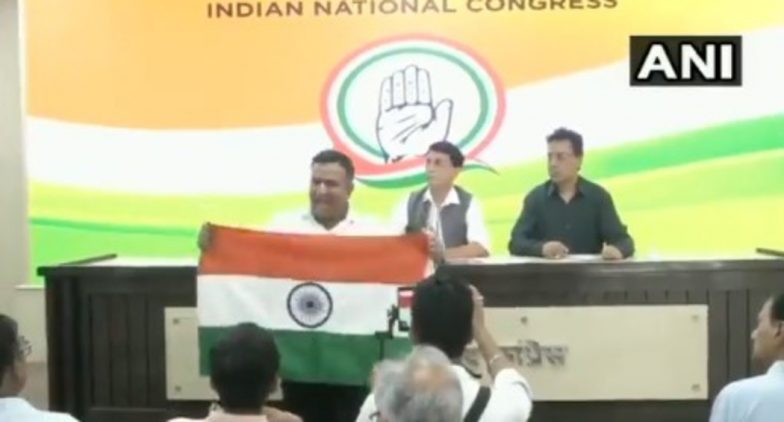 New Delhi, May 15: A press briefing of All India Congress Committee (AICC) on Wednesday witnessed a high drama. A fan of Uttar Pradesh Chief Minister Yogi Adityanath interrupted a media briefing by Indian National Congress spokesperson Pawan Khera. In the video, Adityanath's fan can be seen being pulled out by the security officials. The man, while holding Tricolour, also raised Bharat Mata ki Jai slogans. The incident took place in the party's headquarters in New Delhi. Digvijaya Singh Asks ‘Did You Get 15 Lakhs’, Youth Embarrasses Him.

Speaking to media persons, the man who created disturbance in the press briefing of Congress said, "there is nothing like agenda of mine. Why I can't go to a press conference. First demand- the one whose parents are from foreign should not contest an election."

This comes just three days before the final phase of 2019 Lok Sabha elections. The seventh-phase is scheduled to take place on Sunday, May 19 in Uttar Pradesh, Bihar and West Bengal. The counting of votes and announcement of results will be held on May 23.