Ziona Chana Death: Funeral of Mizoram Man Who Had One of the World's Largest Families Put on Hold, Sect Members Believe He Is Still Alive

The funeral of Ziona Chana, patriarch of one of the world's largest families, has been put on hold because his family members believe he is still alive. 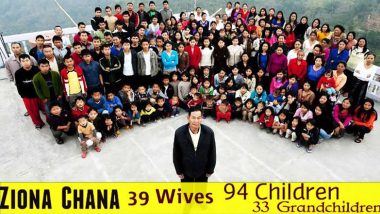 Aizawl, June 15: The funeral of Ziona Chana, patriarch of one of the world's largest families with at least 39 wives and 94 children and 33 grandchildren in Mizoram, has been put on hold because his family members believe he is still alive. Ziona Chana, leader of the Chana sect in Mizoram's Chhuanthar Tlangnuam village, died on June 13. His death was also confirmed by Chief Minister Zoramthanga.

Ziona Chana was declared "brought dead" by doctors at the Trinity Hospital on June 13. However, a majority of his 38 wives and elders in the Chana sect believe he is not dead, a TOI report said. "His pulse was felt through oximeter, his body is still warm and there was no stiffening of muscles till Monday afternoon," Zaitinkhuma, secretary of the local church, was quoted as saying. 'No Woman Gave Birth to 10 Babies in Gauteng': Government Statement on Decuplets Reports in South African Province Leaves Netizens Confused.

The family has postponed the funeral. Zaitinkhuma added that the time for funeral of Ziona would not be determined as long as his body remains warm and his pulse is felt. The doctors have dismissed the claims of the cult community. However, the family has decided not to hold the funeral for now.

Born on July 21, 1945, Zionghaka, commonly known as Ziona Chana, died after suffering from hypertension and diabetes. He was 76. Ziona, believed to be head of the world's one of the biggest families and he has 89 children, 14-daughters-in-law, and 33 grandchildren, reportedly met his oldest wife, who is three years older than he was, when he was 17.

According to reports, Ziona married ten women in a year many years ago. He featured in Ripley's Believe It or Not in 2011 and 2013. The sect allows the family members to marry as many women as one wants.

(The above story first appeared on LatestLY on Jun 15, 2021 12:28 PM IST. For more news and updates on politics, world, sports, entertainment and lifestyle, log on to our website latestly.com).