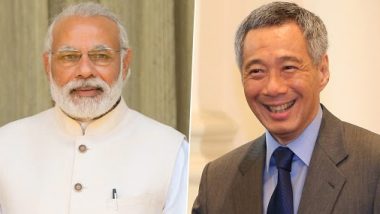 New Delhi, July 11: Prime Minister Narendra Modi on Saturday congratulated Lee Hsien Loong, the Prime Minister of Singapore for his victory in the recently held general elections in the country. Taking to micro-blogging site Twitter, PM Modi wrote a congratulatory message for his Singaporean counterpart and leader of the People''s Action Party Loong for securing a clear mandate in the elections.  He also extended his best wishes to the people of Singapore for a peaceful and prosperous future.

"Congratulations to Prime Minister Lee Hsien Loong for success in the General Elections! Best wishes to the people of Singapore for a peaceful and prosperous future", PM Modi tweeted. Loong emerged victorious the general elections with his ruling People’s Action Party (PAP) winning 83 of the 93 contested parliamentary seats. The general election was held amidst the COVID-19 pandemic, with the Opposition gaining ground by winning a record 10 seats.

Congratulations to Prime Minister @leehsienloong for success in the General Elections! Best wishes to the people of Singapore for a peaceful and prosperous future.

Reports informed that as many as 2.6 million Singaporeans voted on Friday.  A total of 192 candidates contested for seats through 17 Group Representation Constituencies (GRCs). This election was the 18th general election in Singapore and the 13th since independence. The ruling party, in power since independence in 1965, secured 61.24 per cent of the total votes cast in the election, down from 69.9 per cent in 2015.

(The above story first appeared on LatestLY on Jul 11, 2020 03:15 PM IST. For more news and updates on politics, world, sports, entertainment and lifestyle, log on to our website latestly.com).