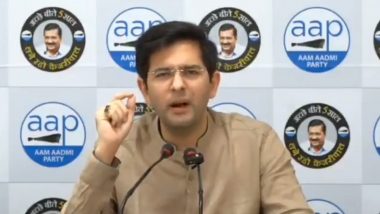 "Congress neither has any future nor it can give any future to this country," Chadha said, adding that "Congress is on a ventilator today and State after state, the can be seen selling its MLAs." He also cited the examples of similar power tussle in Goa, Madhya Pradesh and Karnataka. Congress Reacts to Sachin Pilot's 'Not Joining BJP' Remark, Asks Him to 'Come Back to Home in Jaipur'.

"Congress is on a ventilator today.

State after state, Congress can be seen selling its MLAs." : @raghav_chadha pic.twitter.com/0uqeZCCAvo

The Aam Aadmi Party's reaction comes after a political tussle in Rajasthan intensified with the sacking of Sachin Pilot as state's deputy chief minister and state Congress committee chief. Along with him, his two loyalist ministers were also removed.

The MLAs of the rebel Sachin Pilot camp has moved to Rajasthan Hight Court against disqualification notice issued to them by assembly speaker CP Joshi. The Ashok Gehlot-led government has sought their disqualification for anti-party activities.

(The above story first appeared on LatestLY on Jul 16, 2020 03:52 PM IST. For more news and updates on politics, world, sports, entertainment and lifestyle, log on to our website latestly.com).