Shah's visit to Advani's residence comes amid reports of the 91-year-old sulking ever since the party decided not to field him from Gandhinagar, the constituency represented by him consecutively since 1989. 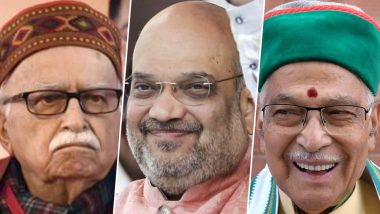 New Delhi, April 8: BJP president Amit Shah on Monday reached out to the sidelined party veterans - Murli Manohar Joshi and Lal Krishna Advani - days after dropping them from the list of candidates for the upcoming Lok Sabha elections 2019. Shah met both the senior leaders at their respective residences in the national capital in the evening.

Shah's visit to Advani's residence comes amid reports of the 91-year-old sulking ever since the party decided not to field him from Gandhinagar, the constituency represented by him consecutively since 1989. Advani Breaks Silence: 'BJP From Its Inception Never Regarded Opponents as Anti-National'

The speculations of dissidence gained traction after Advani penned a blog ahead of the BJP Foundation Day, stating that the party which he co-founded never considered opponents as "anti-national". His remarks came at a time when Prime Minister Narendra Modi has accused the Opposition of "appeasing Pakistan" to win the upcoming polls.

Advani had also stoked a row with his emphasis to inner-party democracy in the blog, calling it essential for a robust democracy.

While Advani has been denied the ticket from Gandhinagar, Murli Manohar Joshi is not being fielded from his incumbent seat of Kanpur.

Both the leaders were sidelined following the 2014 Lok Sabha polls, when Joshi and Advani, along with Yashwant Sinha, were made part of the BJP Margdarshak Mandal -- a committee of seniors. However, no meetings of the Mandal were scheduled in the last 5 years, making it virtually a non-effective body.

(The above story first appeared on LatestLY on Apr 08, 2019 07:08 PM IST. For more news and updates on politics, world, sports, entertainment and lifestyle, log on to our website latestly.com).