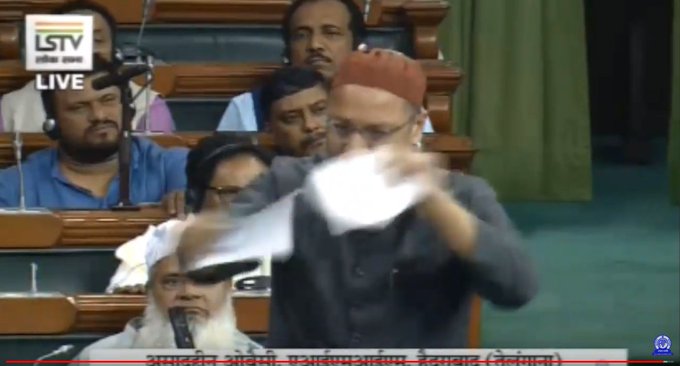 New Delhi, December 9: All India Majlis-e-Ittehadul Muslimeen lawmaker Asaduddin Owaisi on Monday tore apart a copy of the contentious Citizenship Amendment Bill in Lok Sabha. While tearing a copy of the Citizenship Amendment Bill, Asaduddin Owaisi said that the proposed legislation was an attempt to divide the country on religious line. "Another partition is going to happen. This Bill is against the Constitution of India and disrespect to our freedom fighters. I tear the Bill, it is trying to divide our country," Owaisi said in the lower house of Parliament. Citizenship Amendment Bill Debate: Manipur to be Exempted Via Inner Line Permit, Says Amit Shah; Here's How ILP Will Offset CAB Impact.

Earlier today, the AIMIM MP said that secularism is the basic structure of the Consitution and the Bill was arbitrary in nature and was in violation of fundamental rights. He said that Amit Shah would be remembered with the likes of German Fuhrer Adolf Hitler and Israel's late Founder-Prime Minister David Ben-Guher if the law is enacted and implemented. "The Home Minister should be prevented from carrying out this enactment. Otherwise, he will be compared with David Ben-Gurion, the founder of the Jewish state of Israel, and Hitler," he said.

The Citizenship (Amendment) Bill, 2019 seeks to provide Indian nationality to Hindus, Christians, Sikhs, Parsis, Jains and Buddhists fleeing persecution in Pakistan, Afghanistan and Bangladesh. The proposed legislation is criticised for leaving out Muslim immigrants. Following over an hour's debate on Bill's legislative competence if it can be taken or not, Lok Sabha allowed it after the division of votes with 293 in its favour and 82 against.