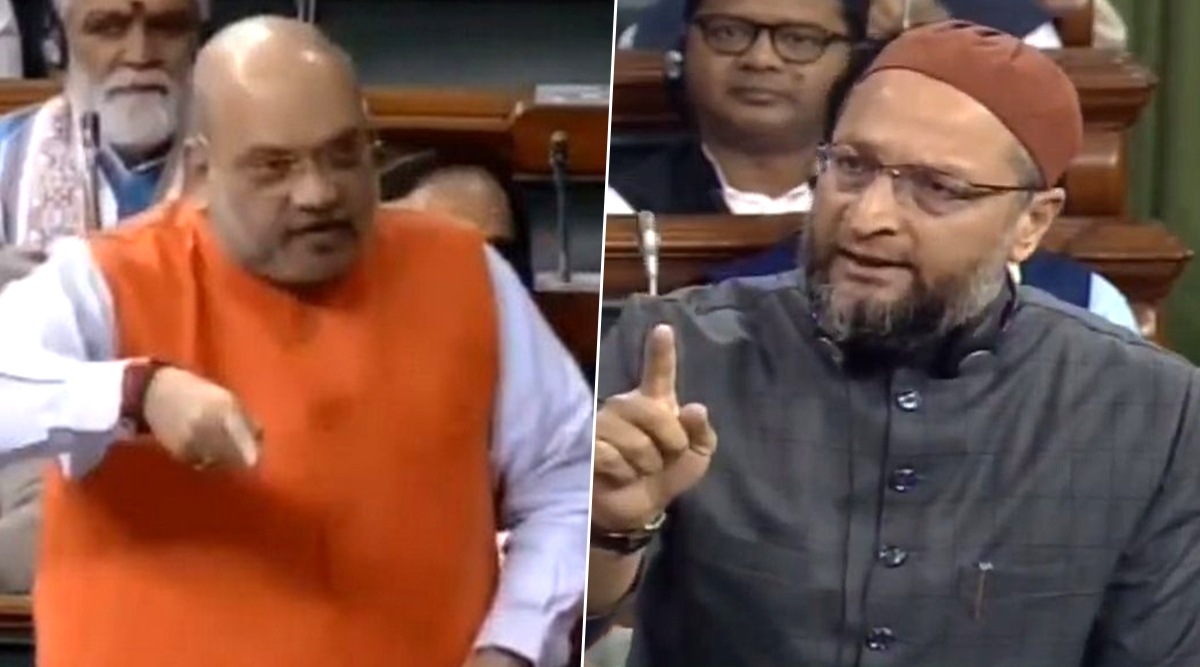 New Delhi, December 9: Stoking a row during the debate over Centre's proposed Citizenship Amendment Bill (CAB) in Lok Sabha, Hyderabad lawmaker Asaduddin Owaisi said that Union Home Minister Amit Shah would be remembered with the likes of German Fuhrer Adolf Hitler and Israel's late Founder-Prime Minister David Ben-Guher if the law is enacted and implemented. His remarks infuriated the treasury benches, leading to a brief ruckus in the House. Here's All You Need to Know About the Contentious CAB.

Owaisi, while speaking on the law which aims to naturalise non-Muslim refugees from Afghanistan, Bangladesh and Pakistan, said the Bill is "discriminatory" and will end up equating India with Israel -- accused of being an apartheid State.

"This Bill will make India Israel, which is know for discriminating on the basis of religion," the All India Majlis-e-Ittehadul Muslimeen (AIMIM) chief said. He further warned against a possible revival of the "two-nation theory" which had led to the creation of Pakistan.

"I appeal to you (Speaker), save country from such a law and save Home Minister also otherwise like in Nuremberg race laws and Israel's citizenship act, Home Minister's name will be featured with Hitler and David Ben-Gurion," Owaisi said.

Asaduddin Owaisi in Lok Sabha: I appeal to you(Speaker), save country from such a law&save Home Minister also otherwise like in Nuremberg race laws and Israel's citizenship act, Home Minister's name will be featured with Hitler and David Ben-Gurion. #CitizenshipAmendmentBill2019 pic.twitter.com/ZEp1siNo56

"Those who believe religion should determine nationhood, that was the idea of Pakistan," Tharoor said, shortly after his party member Adhir Ranjan Chowdhury said the legislation is intended to target the minority community of India.

Shah, while responding to Chowdhury's remark, said he "would like to assure the House that the Bill is not even .001 percent against the minority community". The Home Minister further claimed that no legal citizen of India, irrespective of their faith, would have their rights snatched through the law. The Bill is only aimed at weeding out the illegal immigrants, he claimed.