Assembly Elections 2022 Dates And Full Schedule Announced by EC: Voting to Take Place Between Feb 10 And March 7 in UP, Punjab, Uttarakhand, Manipur, Goa; Results on March 10

The Election Commission of India on Saturday announced the dates and schedule for upcoming assembly elections in the poll bound states of Uttar Pradesh, Goa, Uttarakhand, Manipur and Punjab 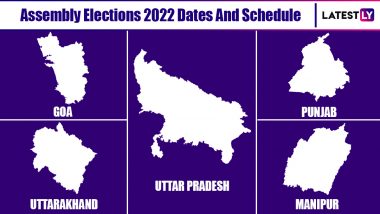 New Delhi, January 8: The Election Commission of India on Saturday announced the dates and schedule for upcoming assembly elections in the poll bound states of Uttar Pradesh, Goa, Uttarakhand, Manipur and Punjab. As per the announcement, the Assembly Elections 2022 for 403 seats in UP will be held in Seven phases from 10th February to 7th March while 40 seats in Goa, 70 seats in Uttarakhand and 117 seats in Punjab will go to polls on 14th February. Elections for the 60 seats of Manipur legislative assembly will be held in two phases on 27th February and 3rd March.

The results of the elections will be announced on March 10.

Dates have ben announced a day after the Union Health Secretary, in his meeting with the ECI, presented the overall global and domestic status of spread of Covid, as Well as Omicron, in the country.

Details were also presented on status of preparedness of the public health response within the states for control and management of the increasing numbers of Covid cases, the statement by the Union Health Ministry Said.

Elections for the UP legislative assembly will be held in seven phases between February 10 to March 7.

Citing the latest surge in COVID-19 cases, the Congress had announced that it would not hold any rallies in Uttar Pradesh and urged Prime Minister Narendra Modi and Chief Minister Yogi Adityanath to refrain from holding large public events in the state.

Uttar Pradesh, the country's largest state in terms of Lok Sabha seats, remains crucial for the BJP and especially for the Modi-Shah duo where they are expected to face a tough challenge from the Samajwadi Party.

Elections for the 70 seats in Uttarakhand will be held on 14th February.

Since the formation of Uttarakhand, the people of the state have not given a mandate to the government of any one party for a second time in a row. Breaking this trend, forming the government consecutively for the second time is another big task for the BJP in 2022.  Uttarakhand Assembly Election 2022: Arvind Kejriwal Promises Rs 1 Crore to Kin of Security Personnel Who Die in Action

Elections for the 117 seats of the Punjab legislative assembly will be held on 14th February.

In Punjab the incumbent Congress government led by Charanjit Singh Channi faces anti-incumbency and the Aam Aadmi Party( AAP) which has intensified its attacks on the state government. The Kejriwal-led Aam Aadmi Party is focussing on two issues -- education and illegal sand mining -- in its fight against the Congress.

Assembly elections for the 40 seats in Goa will be held on February 14th.

Known for its volatile, tumultuous political developments, Goa politics is hotting up as battle lines are being drawn by a slew of contenders for the Assembly elections.

While the BJP, which has been ruling the state for a decade, and the main Opposition Congress remain the principal contenders, the aggressive entry of the TMC and AAP into Goa’s packed electoral field has given the battle another dimension.

Elections for the 60 seats of Manipur legislative assembly will be held in two phases on February 27th and 3rd March.

In Manipur, with knives out for Chief Minister N. Biren Singh within the BJP and severe anti-incumbency against his government, the lead Opposition party in the State, Congress has reason to cheer, except the party is still dragging its feet into the Assembly election with 73-year-old Okrom Ibobi Singh, Manipur’s three-term Chief Minister, who is both the party’s strength and weakness.

(The above story first appeared on LatestLY on Jan 08, 2022 04:15 PM IST. For more news and updates on politics, world, sports, entertainment and lifestyle, log on to our website latestly.com).