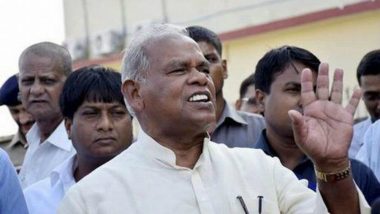 According to a report, published in the Hindustan Times, the Bihar government revised the security arrangement for Hindustani Awam Morcha (HAM-S) chief Dalit leader Jitan Ram Manjhi to Z plus security based on the current threat perceptions. With this, Manjhi will now have a Z plus security which is a notch higher than the Z security cover which he had earlier. Bihar Assembly Elections 2020 Opinion Poll: BJP-JD(U)+ Likely to Win 151 Seats, Mahagathbandhan May Retain 74, Predicts IANS C-Voter Survey.

It is to be known that Bihar governor and chief minister are Z-plus and advanced security liaison (ASL) protectees. However, now Lalu Prasad, Rabri Devi and Jitan Manjhi will too have Z-plus security, as they are the former chief ministers of the state. While protection for former chief minister Dr Jagannath Mishra was withdrawn as he died. As per reports, 31 VIPs will be given security cover.

(The above story first appeared on LatestLY on Sep 26, 2020 02:01 PM IST. For more news and updates on politics, world, sports, entertainment and lifestyle, log on to our website latestly.com).