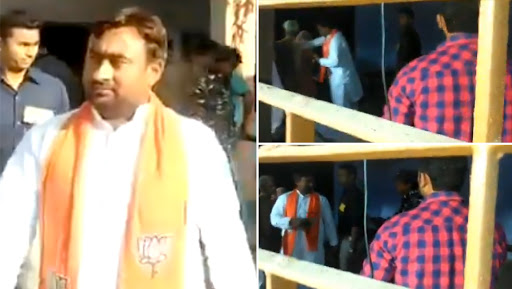 Bulandshahr, April 18: With the polling for Second Phase of Lok Sabha Elections 2019 in full swing, recording a whopping 38.34 per cent in Uttar Pradesh till 1 pm, Bharatiya Janata Party candidate from Bulandshahr - Bhola Singh - was seen touching the feet of voters at polling stations after which he was house arrested on the orders of Election Commission.

According to the video, which has become viral, Singh arrived at a polling station in his constituency and started chatting with the security personal. When asked not to enter the polling station in Sharma Inter College, Singh gave the phone to security personal and entered the polling station and started touching the feet of voters, asking them to vote for him in the Lok Sabha Elections 2019. Mental Health Institute Inmates in Chennai Cast Votes in Phase 2 of Lok Sabha Elections 2019.

Taking cognisance of the video, the EC took swift action and he was house arrested after BSP raised objections. As per to initial details, when the security personal denied Singh entry into the polling booth, the BJP candidate gave the phone to him which was allegedly of District magistrate. DEO Bulandshahr ordered the detention of BJP candidate Bhola Singh for violating the model code of conduct.