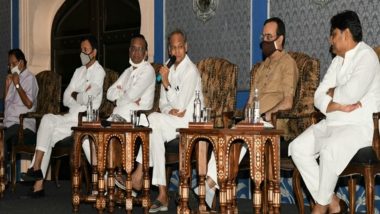 Jaipur, July 30: Congress legislators will be camping at Hotel Fairmont in the city till the Rajasthan Assembly convenes on August 14, sources said. Chief Minister Ashok Gehlot has told MLAs at the Congress Legislature Party (CLP) meeting that they will have to stay at Hotel Fairmont in Jaipur till August 14.

Ministers can visit the Secretariat to complete their work, a source present at the CLP meet told ANI.nOn Wednesday, Governor Kalraj Mishra issued an order to convene the state Assembly session from August 14. Rajasthan Political Crisis: CLP Meeting Under CM Ashok Gehlot to Be Held at Hotel Fairmont.

The order for convening the Assembly was issued after the fourth request by the state government. The Gehlot government is facing a crisis due to differences within the ruling Congress.

Rajasthan Congress has been in turmoil ever since simmering differences between former Deputy Chief Minister Sachin Pilot and Gehlot came out in the open. Pilot was removed as the Deputy Chief Minister and the state unit chief of Congress on July 14. The Congress has accused the BJP of indulging in horse-trading to bring down the Gehlot government. However, the BJP has rejected these allegations.