Delhi Chief Minister Arvind Kejriwal did not reach Jaroda on Wednesday to take up the challenge of Bharatiya Janata Party state president Adesh Gupta for a debate. He had challenged Arvind Kejriwal on Tuesday to debate on who has done how much work and to count the work. 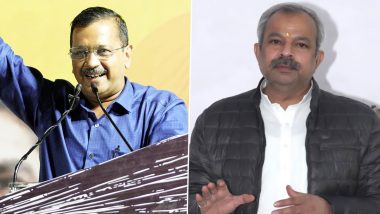 New Delhi, Nov 30: Delhi Chief Minister Arvind Kejriwal did not reach Jaroda on Wednesday to take up the challenge of Bharatiya Janata Party state president Adesh Gupta for a debate. He had challenged Arvind Kejriwal on Tuesday to debate on who has done how much work and to count the work.

On reaching Jaroda Adesh Gupta, after waiting for half an hour, said that the Aam Aadmi Party and its chief Arvind Kejriwal have a habit of levelling allegations against anyone, that too without knowing its basis. For this many times he has had to apologize to many people. They are saying that the BJP should get its work counted in the corporation, we have reached here to debate with the CM on work done by the MCD but Arvind Kejriwal is missing from here because he has a habit of lying. MCD Elections 2022: 'Kattar Beiman' to 'Dhokha Ratna'; Phrases That Sprang Up Ahead of Delhi Polls.

He said that if Kejriwal is asked for two works done by him then he starts saying that he is being abused. The real issue is that instead of working, they only want to do corruption. In every work they have done they have looted the public.

They have prepared a wonderful model of loot, in which they give a rebate of Rs 600 per month to the people in the name of half the cost of electricity, and they themselves earn Rs 2500 crore in kickbacks from discoms.

Similarly they promised to reduce the water bill but instead have looted Rs 40000 crore from the DJB and turned it into a loss making Board. The special thing is that when the BJP demands its audit, they start calling it abusive. When we ask them why they are opening liquor vends in the streets of Delhi, they say that the BJP is abusing them. MCD Elections 2022: Congress Manifesto Promises Water Purifiers to Poor, Day-Boarding at Civic Schools in Delhi.

Adesh Gupta said that on the other hand the BJP got world class schools built by the MCD. Today, garbage is being picked up from every street of Delhi. We have set up four power plants in Delhi to generate electricity from garbage. 100 MW electricity is being generated in these. We have got LED lights installed in the corporation areas of entire Delhi.

(The above story first appeared on LatestLY on Nov 30, 2022 07:31 PM IST. For more news and updates on politics, world, sports, entertainment and lifestyle, log on to our website latestly.com).