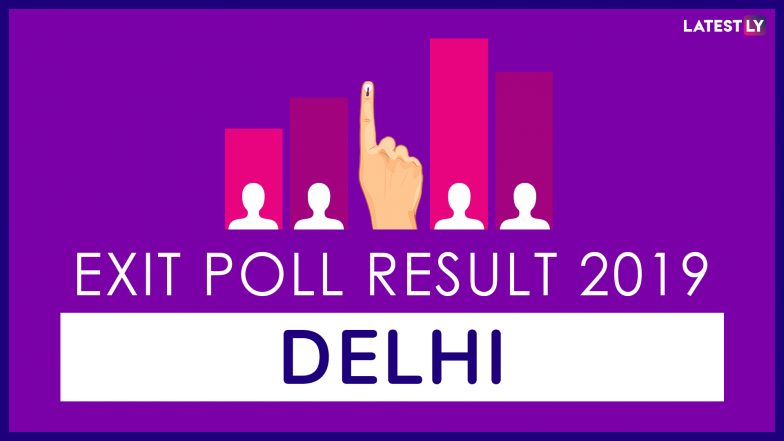 Chandigarh, May 19: The exit poll results of Lok Sabha Elections 2019 for all constituencies of the National Capital Territory (NCT) of Delhi are out. The poll of polls for the national capital is all good news for the Bharatiya Janata Party. Most polls have predicted a clean sweep for the BJP, saying the party is set to win all seven seats. of the Voting in Delhi was held in a single phase. Delhi went to polls in the sixth phase of Lok Sabha Elections 2019 on May 12. A total voter turnout of 60.51 per cent was recorded in the national capital. Exit Poll Results For Lok Sabha Elections 2019: Poll Predictions by India Today-Axis My India, ABP-CSDS, News 24-Today's Chanakya And More.

Here are the Exit Poll Predictions For Delhi

Delhi has a total of seven Lok Sabha constituencies. It was witness to some of the most exciting and high profile battles this election season. From singer to cricketers and boxers, the national capital saw candidates with experience beyond politics. Delhi saw a tight three-way fight with the Congress, Aam Aadmi Party and Bharatiya Janata Party (BJP) going all out to win these seven seats.

In Chandni Chowk, BJP's Harsh Vardhan was pitted against JP Agarwal of the Congress and Pankaj Gupta of the AAP. South Delhi saw boxer-turned-politician Vijender Singh, fighting on a Congress ticket, take on AAP's Raghav Chadha and BJP's Ramesh Bidhuri.

The East Delhi seat is witnessing one of the most exciting battles this election. It was Atishi of the AAP vs cricketer-turned-politician Gautam Gambhir of the BJP vs Congress veteran Arvinder Singh Lovely on this seat. The result of this seat would be closely watched.

Another interesting battle this election season was on the North East Delhi seat where former chief minister Sheila Dikshit of the Congress was pitted against BJP's Manoj Tiwari.

Voting for the Parliamentary Polls 2019 was held across the country in seven phases between April 11 and May 19. The counting of votes for Lok Sabha Elections 2019 will take place on May 23. The General Election results would be declared on the same day.