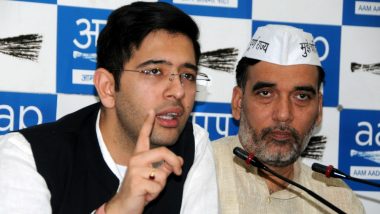 In a letter to Modi, Lok Sabha member Bhagwant Mann and Chadha said the farmers of Punjab along with various other states had been protesting on Delhi borders for the last six months to demand withdrawal of three agricultural laws made by the Union government.  Farmers Protest: Samyukta Kisan Morcha Writes to PM Narendra Modi to Resume Talks Over Farm Laws

They said the farmers had so far lost 470 of their fellows during this struggle, that was unfortunate and painful.

The AAP leaders said that although 11 rounds of talks had been held between the farmers' representatives and the government to find a solution to the problem, no conclusion had been reached so far.

"The government has not made any attempt to negotiate with the farmers since January 22, which is not in the interest of the farmers and the nation," they added. The leaders said the farmers are the backbone of the country and without agriculture this country could not be imagined.

They said that even during the current COVID-19 pandemic, there had been a sharp decline in all sectors except agriculture. "With the strengthening of the agricultural sector, the rural infrastructure of Punjab and the rest of the country has survived," they said.

They further said the farmers of the country, who were rendering their services by replenishing the foodgrains of the country and in every field, had to protest for their demands at the cost of their lives during the COVID-19 pandemic.

"Concerned about their future, the country's farmers, including the elderly, children and women, have left their homes and settled on the borders of Delhi, which is also against human rights," they added.

In their letter, the AAP leaders wrote to the Prime Minister that, now the farmers' leaders have once again called for talks, the Prime Minister should also accept the invitation with humility and generosity and resume talks on the issue, resolving it permanently.

(The above story first appeared on LatestLY on May 22, 2021 05:55 PM IST. For more news and updates on politics, world, sports, entertainment and lifestyle, log on to our website latestly.com).