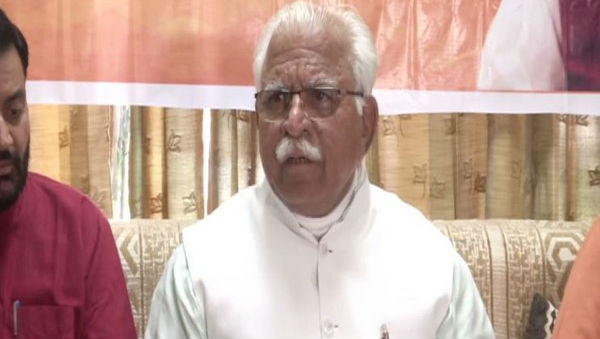 New Delhi, October 24: The Manohar Lal Khattar cabinet collapsed in the Assembly polls as all his ministers, who were in the fray, except one have started losing the battle. What is worse for the Bharatiya Janata Party (BJP) is its state chief Subhash Barala trailing from his Tohana constituency to Devender Singh Babli of the newly-formed regional party -- Jannayak Janta Party. Haryana Assembly Election Results 2019: Close Contest Between BJP and Congress, Silence Looms Large at Manohar Lal Khattar Residence.

However, Khattar, has clear lead and is winning for sure from his Karnal constituency. Captain Abhimanyu, who was Minister of Finance is trailing from his Narnaund constituency to Ram Kumar Gautam of the JJP. Gautam was a former BJP MLA.

Haryana Assembly Speaker Kanwar Pal, a BJP legislator from Jagadhri, is trailing to Akram Khan of Congress. Even Bahujan Samaj Party's Adarsh Pal Singh is giving a tough fight to both the Congress and BJP candidates.

Two sitting ministers Rao Narbir Singh and Vipul Goel were denied tickets and fresh faces brought in. Rao Narbir Singh, was Minister of Public Works (B&R), was BJP MLA from Badshahpur. This time, Manish Yadav was given ticket from BJP. Yadav is trailing to an independent candidate Rakesh Daultabad.

In place of Vipul Goel from Faridabad, BJP had shown faith in Narender Gupta. He has a clear lead but Congress Lakhan Kumar Singla is giving a tough fight.

Anil Vij is the only minister of Khattar cabinet who is leading from his Ambala Cantonment, however, an Independent candidate Chitra Sarwara is giving a tough fight. Maharashtra, Haryana Government Formation Updates: Hectic Parleys On for CM Post in Both States As Elections Results Pour In.

TikTok star and BJP candidate Sonali Phogat is giving a tough fight to Congress stalwart Kuldeep Bishnoi. She is, however, trailing. Phogat, who became famous with her TikTok videos, was given ticket because of her popularity in the region.

Babita Phogat, a Commonwealth gold medalist in wrestling and who had joined the BJP in August this year, is trailing behind an Independent candidate Sombir.