Karnataka Elections 2018: Siddaramaiah vs BS Yeddyurappa vs HD Kumaraswamy – Profiles of The 3 CM Candidates in Fray

While Congress has reposed faith in the incumbent CM Siddaramaiah, the BJP has named BS Yeddyurappa as its prospective chief minister. Will HD Kumaraswamy pull a shock victory? 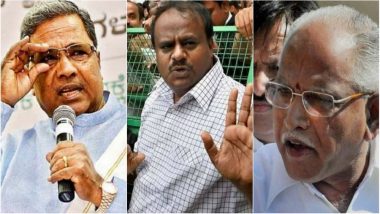 The official results of Karnataka assembly polls will be declared on Tuesday | (Photo Credits: PTI)

Bengaluru, May 11: Assembly Elections in Karnataka are scheduled to be held on Saturday. A day before the state goes to polls to elect a new government, here are the brief profiles of the three Chief Ministerial candidates in the fray.

While Congress has reposed faith in incumbent CM Siddaramaiah, the BJP has named BS Yeddyurappa as its prospective chief minister. Meanwhile, HD Kumaraswamy, the son of former prime minister HD Deve Gowda, has staked his claim to the chair.

Siddaramaiah, who was once an arch-rival of the Congress, joined the party in 2006. Within seven years of his association with the party, he rose to its helm in Karnataka. In 2013, he was largely credited for the landslide victory of the party in the state.

Siddaramaiah was born to a farmer's family in Mysuru district's Siddaramanahundi village. After attaining his early education in the village, he moved to Mysuru where he obtained degrees in Science and Law.

He entered into politics in the early 1970s', inspired by the socialist ideals of Ram Manohar Lohia, the founder of Socialist Party.

Siddaramaiah registered his first electoral victory in 1983, contesting the Chamundeshwari assembly seat in Karnataka on the Lok Dal ticket. In 1985, he was re-elected from the seat in a mid-term poll called by the then government.

In 1989, however, Siddaramaiah lost from the Chamundeswari seat. In 1992, he was appointed as the General Secretary of Janata Dal.

In 1994, he won again from the Chamundeswari seat. In the Janata Dal government that was formed that year, he was appointed as the Finance Minister.

In 1996, Siddaramaiah was elevated as the Deputy CM of Karnataka. In 1999, he separated his ways from Janata Dal and joined Deve Gowda's JD(S).

In 2006, he parted ways with JD(S) too, alleging them of nepotism within the party. His next destination was the Congress party.

In 2008, after the BJP won the state polls that year, Siddaramaiah assumed the role of the Leader of Opposition.

In 2013, he was credited for the Congress' first full majority victory in the state in the past three decades.

At 75, Yeddyurappa is amongst the rare old faces in the BJP who have been promoted as a Chief Ministerial face by the party. The Lingayat strongman is credited for BJP's only victory, ever, in a state election in southern India. His previous stint as the CM, following the 2008 victory, could last only for three years, as allegations of corruption erupted against him later on. However, he made his way back into the party in 2013.

Yeddyurappa was born in Bookanakere village of Mandya district in 1943. Born to a family of farmers, he studied in the village. In 1965, he became a clerk in the government's social welfare department. He, however, left the job and came to Shikaripura, where he worked as a clerk at a rice mill.

Yeddyurappa made his entry into politics in the late 1960s', when he became an active member of the Jan Sangh -- the predecessor to the Bharatiya Janata Party (BJP).

In 1972, Yeddyurappa was appointed as the Shikaripura unit head of Jan Sangh. In 1975, he was also jailed for being part of the anti-emergency protests.

In 1975, Yeddyurappa won as a Corporator in the Shikarpura civic polls. In 1977, he was elected as the head of the Shikaripura Municipal Council.

In 2008, Yeddyurappa again took oath as the CM after BJP registered a full-majority-victory in the state assembly polls.

Yeddyurappa parted ways with the BJP in 2011, after he was asked to vacate the CM chair due to the graft allegations levelled against him. In 2012, he formed the Karnataka Janata Paksha (KJP). The new party, however, failed to leave a mark in the state assembly polls.

In 2013, Yeddyurappa merged his party into the BJP, making his way back to the saffron fold. In 2014, he won the Shimoga Lok Sabha seat on the BJP ticket.

Kumarswamy, the state unit chief of JD(S), had earlier served as the Chief Minister in 2006-07. In the upcoming elections, all opinion polls have predicted him to play the role of kingmaker. The 58-year-old, however, says, "The people of Karnataka will reject all kings and elect him to serve them".

Kumaraswamy, also referred as Kumar Anna, among his supporters, was born on December 16, 1959, in Haradanahalli village of Hassan district.

In terms of education, he had obtained a degree in Science from Bengaluru's MES Educational Institution.

Although Kumaraswamy was in politics since an early age, it did not stop him to make his career as a film director, writer and producer, later.

He made his formal entry into electoral politics in 1996, when he won the Kanakapura Lok Sabha seat on JD(S) ticket. Two years later, however, he lost the seat in the snap elections called, with even his deposit being forfeited.

In 1999, Kumaraswamy faced yet another electoral setback as he was defeated from the Sthanoor Assembly seat.

In 2004, Kumaraswamy made his way back into state politics, winning the Ramnagar Assembly constituency. The JD(S) had then formed a coalition government with the Congress.

The coalition, however, could last only till 2006, when he, along with 42 JD(S) legislators, joined hands with the BJP. He served as the CM under the coalition government between 2006-07.

In 2013, Kumaraswamy assumed the role of the Leader of Opposition after the JD(S) emerged as the single-largest party among the Opposition ranks.

Although most opinion polls have predicted the JD(S) to win between 35-45 seats, Kumaraswamy claims his party is set for a landslide victory in the state.

Ahead of the elections, the All India Majlis-e-Ittehadul Muslimeen (AIMIM) and the Bahujan Samaj Party (BSP) have already extended their support to the JD(S). Kumaraswamy said the support would aid his party to win over the Dalit and Muslim electorate.

Following the conclusion of polls tomorrow, a more accurate prediction could made on the future of Kumaraswamy, as well as Siddaramaiah and Yeddyurappa as the exit poll results will be out. Stay tuned with the Karnataka election coverage on LatestLY for all the exit poll predictions, post 5pm on Saturday.

(The above story first appeared on LatestLY on May 11, 2018 10:48 PM IST. For more news and updates on politics, world, sports, entertainment and lifestyle, log on to our website latestly.com).