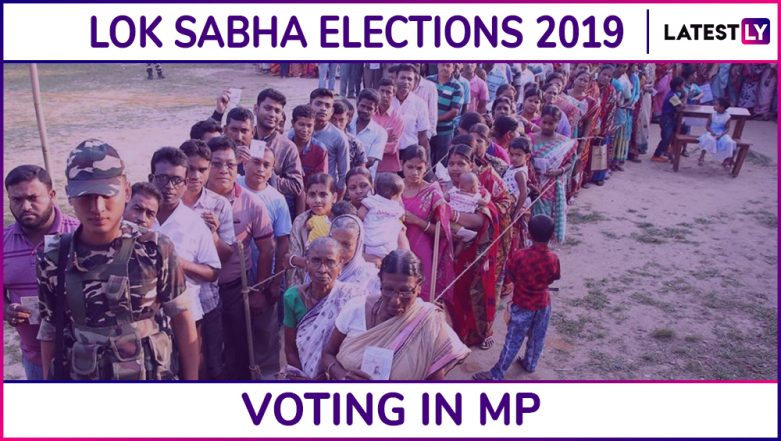 Bhopal, May 12: The phase 6 voting for Lok Sabha Elections 2019 in the eight constituencies of Madhya Pradesh ended on Sunday, May 12. The total voter percentage recorded on all the seats of Madhya Pradesh for phase 6 voting stood at 65.26 per cent, according to the Election Commission. The constituencies that went to poll on Sunday comprise of Morena, Bhind, Gwalior, Guna, Sagar, Vidisha, Bhopal, Rajgarh. In Madhya Pradesh, polling is scheduled be conducted in four phases (4, 5, 6 and 7 phases) taking place on April 29, May 6, May 12 and May 19 respectively. Madhya Pradesh Lok Sabha Elections 2019 Schedule: Constituency Wise Dates Of Voting And Results For MP General Elections.

Polling for 29 seats in the state are being held in four phases. In the fourth phase, six seats went to poll on April 29. On May 6, seven seats went to poll in the fifth phase and in phase six, which are due today, May 12, eight seats will witness polling. In the last and seventh phase, eight seats will vote on May 19. According to details by the Election Commission of India (ECI), the Lok Sabha elections 2019 will be held in seven phases between April 11 and May 19. Results will be declared on May 23. Madhya Pradesh Lok Sabha Elections 2019: Phase 5 Voting Ends; 63.59% Voter Turnout Recorded.