The houses and vehicles of some Bharatiya Janata Party candidates were allegedly attacked and a party office at Arambagh was set on fire. The vehicle of Suvendu Adhikari, who defeated Chief Minister Mamata Banerjee in Nandigram, was also reportedly attacked. 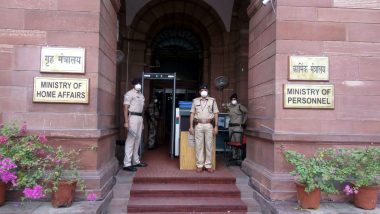 New Delhi, May 3: The Union Home Ministry on Monday sought a report from the West Bengal government on the post election violence in the state targeting opposition political workers.

The Home Ministry in a letter to the West Bengal Chief Secretary has asked him to submit a detailed report on the violence that broke out in parts of the state on Sunday evening even as trends and results from the Assembly election were pouring in.

"MHA has asked West Bengal Government for a report on the post election violence targeting opposition political workers in the state," the Home Ministry Spokesperson tweeted.

After the violence, Trinamool Congress leaders, however, said they had nothing to do with any such incidents in West Bengal and urged people to maintain peace and follow Covid-19 protocols.

At Natabari, the car of BJP candidate Mihir Goswami was learnt to be damaged after the Election Commission announced his victory from Natabari in north Bengal defeating Rabindranath Ghosh, minister and senior TMC leader. A BJP party office at Arambagh was set ablaze where the party's candidate Madhusudan Bag defeated TMC's Sujata Mondal by around 7,100 votes.

At Siuri, a BJP office was ransacked and the local party leader's tractor was set ablaze. A similar incident was reported from Kolkata's Beleghata constituency where a BJP candidate's garage was set on fire.

(The above story first appeared on LatestLY on May 03, 2021 08:06 PM IST. For more news and updates on politics, world, sports, entertainment and lifestyle, log on to our website latestly.com).