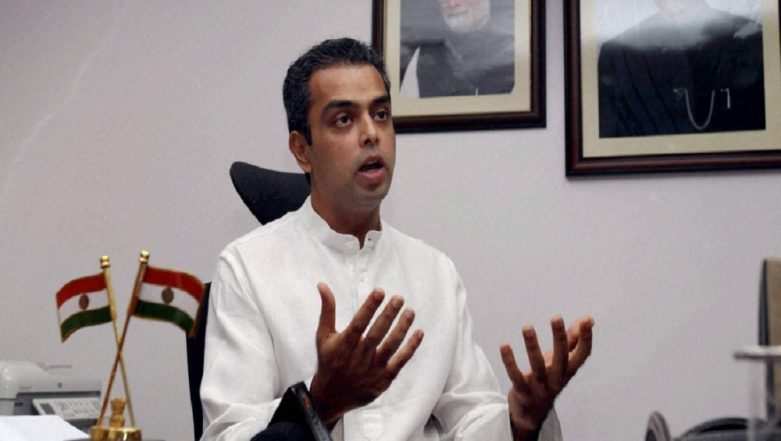 Mumbai, July 2: As Mumbai witnesses its worst rainfall in the decade, senior Congress leader Milind Deora jabbed Maharashtra Chief Minister Devendra Fadnavis, reminding him of the environmental price which the city could be forced to pay due to the 'Bullet Train' or the Mumbai-Ahmedabad high-speed rail project.

Deora, the former Lok Sabha MP from Mumbai South, said the uprooting of 54,000 mangroves for the rollout of Bullet Train will lead to a catastrophic consequence for Mumbai residents. Mumbai Rains: Local Train Services Hit Due to Heavy Showers, Around 54 Flights Diverted

Significantly, State Transport Minister Diwakar Raote had last week told the Maharashtra assembly that an estimated 54,000 mangroves will be slashed while laying the tracks of bullet train. Most of the mangroves which will be uprooted are located along the coastline of Palghar, Mumbai and Thane districts.

Even though Raote said that the state government would be planting 5 trees in Maharashtra in place of every mangrove uprooted, the Opposition was not impressed, claiming that the role of mangroves could be played by marshy plant alone.

Mangroves protect Mumbai from storms, winds, waves & floods. Yet, 54,000 will be razed for the bullet train.

Will the train shift Mumbaikars to Ahmedabad when our city drowns?

"Mangroves protect Mumbai from storms, winds, waves & floods. Yet, 54,000 will be razed for the bullet train. Will the train shift Mumbaikars to Ahmedabad when our city drowns," questioned Deora, further appealing the Maharashtra CM to intervene in the matter. "Planting trees across Maharashtra won't save Mumbai," he added.

Deora's statement criticising the government comes on a day when several parts of Mumbai have been flooded due to incessent rains. Over 20 deaths have been reported in the city in last 24 hours, primarily due to wall collapses.

A public holiday was declared today as commutation facilities in the city turning semi-operational. Trains were delayed by hours, bus services restricted and diverted, and auto-rickshaws also partially plying due to water-logging. All schools and colleges were instructed to remain closed by the state government.