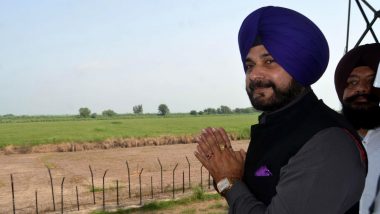 Chandigarh, September 28: Unhappy over the first expansion of Punjab Chief Minister Charanjit Singh Channi's cabinet, state Congress chief Navjot Singh Sidhu on Tuesday resigned from his post. But he said he would continue in the party. He announced his resignation on his Twitter handle in just an hour after Channi announced allocation of portfolios to his Cabinet colleagues. Punjab Congress Crisis: Will Fight Navjot Singh Sidhu’s Elevation to Chief Ministership, Says Captain Amarinder Singh.

In a letter to party President Sonia Gandhi, he wrote, "The collapse of a man's character stems from the compromise corner, I can never compromise on Punjab's future and the agenda for the welfare of Punjab." "Therefore, I hereby resign as the President of the Punjab Pradesh Congress Committee. Will continue to serve the Congress," he added.

It is learnt that Sidhu was upset over the non-inclusion of the MLAs of his choice in the expanded Cabinet and the appointment of new Advocate General, A.P.S. Deol. On Sidhu's resignation, former Punjab CM Captain Amarinder Singh tweeted, "I told you so... he is not a stable man and not fit for the border state of Punjab."

(The above story first appeared on LatestLY on Sep 28, 2021 03:50 PM IST. For more news and updates on politics, world, sports, entertainment and lifestyle, log on to our website latestly.com).