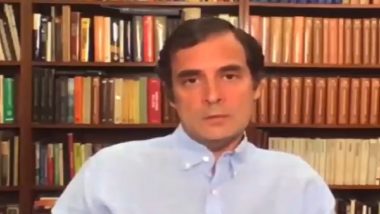 New Delhi, June 29: Congress lawmaker Rahul Gandhi on Monday stepped up attack on the central government over hike in petrol and diesel prices in India. In a video message shared on his Twitter handle, Rahul Gandhi asked the central government to roll back the increase in excise duty on fuel and urged people to join Congress's #SpeakUpAgainstFuelHike campaign to build pressure on the Centre.

"The government has raised prices of petrol and diesel 22 times. It means the government has directly targetted you 22 times. You will have to pay more for buying fuel. Indirectly, you suffer when inflation rises due to a hike in petrol and diesel prices," Rahul Gandhi said in his video message. "Price of crude oil is at an all-time low but fuel prices have touched an all-time high in India," the Congress leader added. Sonia Gandhi Writes to PM Narendra Modi Demanding Rollback of Hike in Fuel Prices.

"We demand that the government rolls back hiked excise duty and reduces the prices of petrol and diesel. Stop robbing poor people of their money," Rahul said, urging people to join the fight. This came after the state-run oil marketing companies raised the prices of petrol and diesel on Monday, a day after there was no hike in rates that were increasing continuously for 21 consecutive days.

Earlier today, Rahul shared a video wherein a person could be heard saying that the government is "rubbing salt on the wounds of people" by increasing the prices at a time when people are either unemployed or not receiving salaries. "Amid coronavirus pandemic and tensions with China, the Centre has left the common man to fend for themselves. It is looting the country by increasing the price of petrol and diesel from the past 21 days," the video narrated.

The video, shared by Rahul Gandhi, went on to urge the people to raise their voice against the hike, so that it lands on the "deaf ears of the government". The narrator asked countrymen to share the video of disgruntled people with the #SpeakUpAgainstFuelHike hashtag on their social media handle.

(The above story first appeared on LatestLY on Jun 29, 2020 04:00 PM IST. For more news and updates on politics, world, sports, entertainment and lifestyle, log on to our website latestly.com).