Rajasthan Congress MLAs, supporting Chief Minister Ashok Gehlot, left from Fairmont Hotel for the airport. They are now being shifted to Jaisalmer. 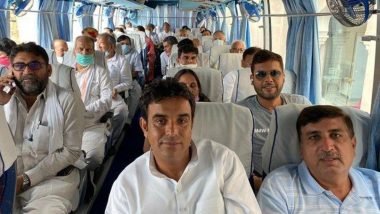 Jaipur, July 31: In the latest development to the Rajasthan political drama, state Congress MLAs, supporting Chief Minister Ashok Gehlot, left from Fairmont Hotel for the airport on Friday morning. They were shifted to Jaisalmer. The reason for being shifted has, however, not been revealed.

Nearly 100 Rajasthan Congress MLAs, who have been staying at the hotel near Jaipur since Sachin Pilot launched a revolt against Chief Minister Ashok Gehlot, were reportedly moved to Jaisalmer by a special flight today.

On Thursday, Gehlot claimed that the "rates of horse-trading" in Rajasthan have increased after the announcement of the assembly session on August 14. "Earlier, the first instalment was of Rs 10 crore and second was of Rs 15 crore. Now it has become unlimited and all know who is doing horse-trading," Gehlot informed reporters. Rajasthan CM Ashok Gehlot Wants 'Unhappy' MLAs to Attend Assembly Session on August 14, Says 'They Have Been Elected on Congress Symbol'.

Rajasthan Governor Kalraj Mishra on Wednesday issued orders to convene assembly session from August 14, 2020. The Governor, in his order, has also directed that all measures should be taken during the conduct of Assembly session, in accordance with the guidelines issued amid the coronavirus pandemic.

(The above story first appeared on LatestLY on Jul 31, 2020 12:52 PM IST. For more news and updates on politics, world, sports, entertainment and lifestyle, log on to our website latestly.com).