A meeting of the Congress Legislature Party in Rajasthan will be held at Chief Minister Ashok Gehlot's residence here on Sunday evening, amid the leadership change buzz following the announcement that he will contest the party president poll. 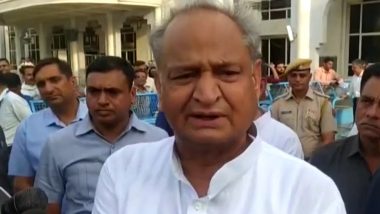 Jaipur, Sep 25: A meeting of the Congress Legislature Party in Rajasthan will be held at Chief Minister Ashok Gehlot's residence here on Sunday evening, amid the leadership change buzz following the announcement that he will contest the party president poll.

Congress president Sonia Gandhi has appointed Mallikarjun Kharge as observer along with general secretary in-charge Rajasthan Ajay Maken. They will attend the meeting of the Congress Legislature Party (CLP) of the Rajasthan Legislative Assembly.

Party leaders in the state said the meeting will clear whether the observers are coming to convey a message of the high command on the name of new chief minister or going to take views of the legislators on the next chief minister.

If the legislators move a proposal that they will accept whatever decision the high command takes then the way for naming the next chief minister will be clear, they said. Chandigarh Airport To Be Named After Shaheed Bhagat Singh, Says PM Narendra Modi in ‘Mann Ki Baat’.

On the basis of discussion and deliberations at the CLP meeting, observers will decide whether to announce the final decision on Sunday or declare it after reaching New Delhi, party sources said, adding the observers may return to the national capital on Monday.

This is the second CLP meeting within a week. The last meeting was held on September 20. Gehlot became the first person to announce his candidature for the AICC presidential poll on Friday and said former president Rahul Gandhi has told him that no one from the Gandhi family should become the next party chief. The chief minister also said that the call on his successor will be taken by Sonia Gandhi and Maken. Uttar Pradesh Government Frames SOPs for Dignified Cremation, Bans Placing Bodies on Road.

Gehlot's remarks came after Rahul Gandhi batted for the "one man, one post" concept in the party, in line with the 'Chintan Shivir' reforms.

Talking to reporters in Kochi, Gehlot had said, "I will fix the date (to submit the nomination papers) after going back (to Rajasthan), but I have decided that I will have to contest. It is a question of democracy and let us make a new start."

Later in the day, Gehlot had told reporters in Shirdi that the debate on "one man, one post" is unnecessary and that he would like to serve the people of his state all his life.

He also said his statements on wanting to serve the people of Rajasthan are being interpreted in different ways. Congress leader Sachin Pilot on Friday had met Rajasthan Assembly Speaker C P Joshi amid speculation of a change of guard in the state. Pilot had met Joshi in his chamber in the state Assembly, where several party MLAs were also present.

According to party sources, Pilot is the main contender for the chief minister's post but Joshi's name is also doing the rounds. Joshi is a former state Congress president and was a contender for the post in 2008 but lost the Assembly elections by one vote at that time. After over two decades, the Congress is set to see a contest for the post of party chief with Gehlot, who has announced his candidature, expected to take on Shashi Tharoor, who had the nomination forms collected from AICC headquarters in Delhi on Saturday.

According to a notification issued by the party on Thursday, the process for filing nominations for the election will be held from September 24 to 30.