The polling for the Rohtas Nagar Assembly seat in Delhi will take place on February 8, along with the rest of 69 Vidhan Sabha constituencies. The triangular contest is expected to be a close fight between the ruling AAP, the BJP and the Congress. The results of the Delhi Vidhan Sabha polls will be announced on February 11 by the Election Commission of India. 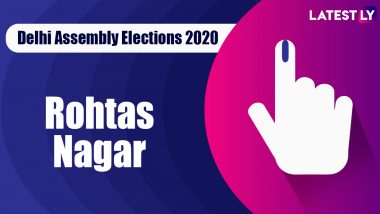 New Delhi, February 11: Bharatiya Janata Party's Jitender Mahajan won from the Rohtas Nagar Assembly seat in Delhi, whose polling took place on February 8, along with the rest of 69 Vidhan Sabha constituencies. Mahajan secured victory against Aam Aadmi Party's Sarita Singh by a margin of 13,241 votes. The results of the Delhi Vidhan Sabha polls were announced on February 11 by the Election Commission of India, stating that AAP won in 62 constituencies, while BJP secured victory in eight seats. This time too, Congress failed to open its account.

Earlier in 2016, Aam Aadmi Party fielded Sarita Singh against BJP candidate Jitendra Mahajan and secured victory from the seat. This time AAP has given ticket to Sarita Singh, while BJP has fielded Jitendra Mahajan. Meanwhile, Congress has fielded Vipin Sharma from this seat. Delhi Assembly Elections 2020: Hits And Misses of Arvind Kejriwal's AAP.

(The above story first appeared on LatestLY on Feb 05, 2020 04:13 PM IST. For more news and updates on politics, world, sports, entertainment and lifestyle, log on to our website latestly.com).