Arvind Kejriwal-led Aam Aadmi Party (AAP) is looking to retain power in the Delhi assembly elections, to be held on February 8. 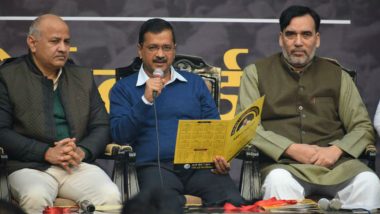 Arvind Kejriwal-led Aam Aadmi Party (AAP) is looking to retain power in the Delhi assembly elections, to be held on February 8. Since its launch on 26 November 2012, the AAP has seen a lot of ups and down from the party's remarkable electoral debut in the 2013 Delhi polls to exit of several founding members. Led by a former civil servant, the AAP first shot to fame in 2013, winning 28 seats in Delhi and eventually formed a government with help from the Congress party. Delhi Assembly Elections 2020: AAP Declares List of Candidates for All 70 Seats.

Subsequently, Arvind Kejriwal became the youngest Chief Minister of Delhi. But his stint lasted for just 49 days as he resigned over Congress's opposition to the Lokpal Bill. In 2014, Kejriwal overestimated AAP's popularity and made the blunder of fielding candidates in more than 400 constituencies in Lok Sabha elections. He contested against Narendra Modi from Varanasi. Kejriwal's calculations went horribly wrong and the AAP could win just four seats. Fact Check: Did Aam Aadmi Party's First List Include 21 Muslim Candidates? Here's The Truth.

Modi defeated Kejriwal winning by more than 300,000 votes. The AAP won just four seats and 96 percent of their candidates lost their deposits. While political pundits were busy writing obituaries of AAP, Kejriwal made a historical come back. In the 2015 Delhi assembly elections, AAP swept 67 of the 70 assembly seats and Kejriwal became Chief Minister for the second time. The AAP government has completed five years and emerged as a formidable force against the Congress and the Bharatiya Janata Party (BJP) in the national capital.

In the last five years, the AAP government's utmost priority remained subsidised water and electricity, and educational reforms. Soon after taking charge, Arvind Kejriwal announced 20,000 litres of free water per month to all households. He announced a 50 percent subsidy on the monthly power consumption of up to 400 units. He later made electricity of up to 200 units free for domestic consumers, while keeping 50 percent subsidy on consumption between 201 units and 400 units, and later extended the scheme to tenants residing in the national capital.

"We ensured schools get high-quality infrastructure. It was a booster for the child’s self-worth and eventually caused a perspective shift among students as well as teachers," Atishi, who was an advisor to Delhi Education Minister Manish Sisodia from 2015 to 2018, told Outlook. The quality of education also improved over the last five years. Last year, CBSE class 12 results showed a pass percentage of 94.24 in government schools. In 2018, the passing percentage was 90, better than the 88.35 percent of private institutions and even the national average of 83.01 percent.

One of the most revolutionary steps was scrapping of management and all other quotas except for reservation for students belonging to the Economically Weaker Sections in private schools for nursery admissions. However, the order was put on hold by the Delhi High Court. But the AAP government made its intention clear that it wants to make education affordable for all. The AAP government also introduced "Higher Education Credit Guarantee Scheme" under which students get loans up to Rs 10 lakh without any collateral or third-party guarantee or margin money to students.

There are, however, issues about which the Kejriwal government could not come up with a major solution. According to a survey conducted by child rights group, CRY, in 2018, nearly 23 percent of children in the age group 11-15 years in urban Delhi-NCR region are dropouts while five percent has never been enrolled in any school. Of a total 64,000 sanctioned posts, permanent teachers occupy about 36,000, while guest teachers work on 22,000 posts, leaving as many as 6000 posts vacant. A report by Praja Foundation, an NGO working in the education sector, found that the number of children going to government schools dropped by 8 percent between 2013-14 and 2017-18.

One year after coming to power, the Kejriwal government released full-page newspaper advertisements, claiming it raised "huge saving" due to "corruption-free and honest administration". The ad stated, "Rs 325 crore was the estimated cost of construction of an elevated road. The government completed the work within Rs 200 crore, thereby saving Rs 125 crore." However, a report by Business Standard on projects "completed" during Kejriwal's tenure presents a different picture.

The construction of an elevated road from Mangolpuri to Mubarak Chowk was initially estimated in June 2012 to cost Rs 423.05 crore. The tendered amount in March 2013 (during Congress government) was Rs 289.65 crore. The project was completed in 2015 through an expenditure of 300. Indeed, more amount was spent.

Similarly, the initial amount for the 1.6-km stretch between Mangolpuri and Madhuban Chowk was Rs 423 crore, but costs came down to Rs 289 crore when tendered in March 2013. The government had spent Rs 300 crore when the project was completed in 2015, Rs 11 crore more than the tendered amount. Another flyover from Madhuban Chowk to Mukarba Chowk was estimated to cost Rs 421 crore but the amount got reduced to Rs 279.9 crore when tendered in March 2013. This project was also completed with Rs 300 crore.

The AAP government, indeed, saved taxpayers money in the Prembari Pul and Azadpur elevated corridor project. The six-lane stretch road was initially estimated in June 2012 to cost Rs 247.17 crore. The tendered amount in February 2013 was Rs 182 crore. However, the project was completed through an expenditure of Rs 142 crore - a saving of Rs 37 crore.

The mohalla clinic project was praised by Kofi Annan, former secretary-general of United Nations and Gro Harlem Brundtland, former director-general of World Health Organisation. Chief Minister Arvind Kejriwal promised 1,000 mohalla clinics to the city in June 2016. However, the Delhi government could open only 301 clinics since it came to power in 2015. Besides, the AAP had promised to add 30,000 more beds in Delhi hospitals. While it almost doubled the number of beds from 7,226 in 2015 to 13,819 in 2019, it failed to reach the promised figure.

Ahead of the Delhi assembly elections, the Kejriwal government launched a free of cost travel scheme for women in Delhi Transport Corporation (DTC) and cluster buses. The idea is to encourage women to use public transport. The AAP government also promised to increase the number of marshals in public buses, who will be deployed to ensure the safety of women on board. While the two initiatives were widely appreciated and rightly so, the Delhi government under AAP failed to focus on basics.

According to a report by The Print, the AAP government did not add a single bus to DTC’s fleet in the last five years. Every year, at least 318 buses on an average are being scrapped. With the current rate, the transport body will be left with only 204 functional buses by 2025, the report added quoting officials. "The transport in Delhi has collapsed with the number of buses going down from 6200 to 3200," BJP spokesperson Naveen Kumar told LatestLY.

AAP came to power in the aftermath of the anti-corruption movement led by Anna Hazare and Arvind Kejriwal. Over the five years after coming to power, the AAP government reduced corruption significantly. During a survey conducted by in 2018, 59 percent of respondents said that the Kejriwal government has succeeded in curbing corruption in Delhi. According to another survey conducted by LocalCircle this year, more than two-thirds of the citizens of the national capital were satisfied by the performance of the Arvind Kejriwal-led AAP government.

Even AAP leaders were not spared when corruption charges were made against them. AAP removed former minister (Asim Ahmed Khan) when he was found involved in corruption.

Despite subsidies on water and electricity rates, the AAP government maintained a revenue surplus over the last five years. According to an audit report by the Comptroller and Auditor General (CAG), the overall tax revenue increased to Rs 35,717.02 crore in 2017-18 from Rs 25,918.69 crore in 2013-14. In the fiscal year ending March 2018, tax revenue registered an increase of 14.70 per cent and non-tax revenue a jump of 101.05 per cent.

Overall, the AAP has more hits than misses. Arvind Kejriwal may not be perfect. But let me quote Delhi’s former Lieutenant Governor Najeeb Jung with whom Kejriwal had a fierce power struggle. In a recent interview, Jung said: "I think as a chief minister, Arvind has his heart in the right place."

(The above story first appeared on LatestLY on Jan 27, 2020 12:27 PM IST. For more news and updates on politics, world, sports, entertainment and lifestyle, log on to our website latestly.com).