The main electoral contest is between the Shiv Sena and the Congress in Shirdi parliamentary seat. 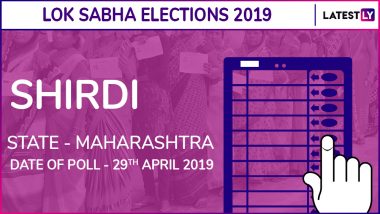 Shiv Sena fielded its sitting Member of Parliament (MP) Bhausaheb Kamble from Shirdi constituency. Kamble will face a tough challenge from Sadashiv Lokhande of the Congress. The process of filing nomination for Shirdi Lok Sabha election began from April 2. The last day for nominations was April 9. Check Full Schedule of Lok Sabha Elections 2019.

The scrutiny was done on April 10 and the last date for the withdrawal of the nominations was April 12. The Shiv Sena and BJP are contesting 23 and 25 seats respectively of the total 48 Lok Sabha constituencies in Maharashtra. The NCP is contesting 24 and the Congress will fight 24. Both the parties have formed an allaince. Maharashtra Lok Sabha Elections 2019 Dates: Constituency-Wise Complete Schedule Of Voting And Results For General Elections.

(The above story first appeared on LatestLY on May 23, 2019 08:51 PM IST. For more news and updates on politics, world, sports, entertainment and lifestyle, log on to our website latestly.com).