With poll victory in sight, DMK cadres assembled at the party headquarters here and celebrated by bursting crackers and dancing, with no adherence to Covid-19 safety protocols. The party cadres are visibly happy as DMK is expected to maintain the lead and finally win the poll to capture power in the state after a decade. 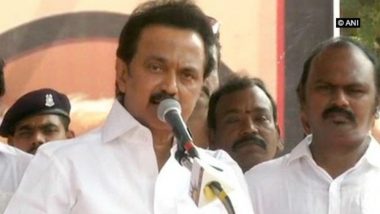 Chennai, May 2: Change of guard is all set to happen after 10 years in Tamil Nadu with the DMK-led alliance coasting towards an emphatic victory in the 2021 Assembly polls.

On the other hand, the AIADMK-led front is leading in 90 constituencies (AIADMK 81, BJP 3 and PMK 6). "In the history of DMK, a new chapter is set to begin," Stalin said in a statement. Assembly Elections Live Updates.

He said going by the leading position of the DMK-led alliance in majority of the constituencies, it is clear the party will form the next government. "The AIADMK numbers may settle down further as the vote difference between its candidates and rivals in about 60 seats is narrow and the lead may reverse later," expelled former AIADMK Parliamentarian K.C. Palanisamy told IANS.

The DMK-led alliance has notched up a comfortable lead routing the AIADMK front across the state barring the western belt where the latter is holding its own.

With poll victory in sight, DMK cadres assembled at the party headquarters here and celebrated by bursting crackers and dancing, with no adherence to Covid-19 safety protocols. The party cadres are visibly happy as DMK is expected to maintain the lead and finally win the poll to capture power in the state after a decade. Assembly Elections 2021 Results Live News Updates.

"The AIADMK has put up a good performance despite the expectations/predictions to the contrary. The party had the issue of dual leadership (Coordinator O. Panneerselvam, Joint Cooordinator K. Palaniswami), and anti-BJP sentiments in the state," a political analyst, preferring anonymity, told IANS.

According to him, the AIADMK may settle down at 60-70 seats which is a commendable performance.

On the factors that worked for DMK, the analyst cited anti-incumbency against the AIADMK government, the anti-BJP sentiment, alliance arithmetic, the steady cultivation of the perception that it will win the polls over a long period of time, and caste neutrality. He did not agree that the assembly poll victory was an extension of the DMK-led alliance's victory in the 2019 Lok Sabha polls.

"That was a total rout for the AIADMK-led alliance. During the Lok Sabha elections, it was Congress leader Rahul Gandhi for the Prime Ministership that was on the centre stage," the analyst said.

In 2019 there was an anti-Modi wave in Tamil Nadu. But in the 2021 Assembly elections, Stalin was at the centre stage but there was no wave in his favour to rout the AIADMK, the analyst said. Assembly Election 2021 Results: Rajnath Singh Congratulates Mamata Banerjee, MK Stalin for Victories of Their Parties in West Bengal and Tamil Nadu.

One interesting aspect of this Assembly poll is the NTK party that has emerged as a third force in many constituencies after the DMK and the AIADMK.

"The NTK may notch up a vote share of about seven per cent," the analyst said.

Palanisamy and the political analyst were unanimous that V.K.Sasikala and her nephew and AMMK leader T.T.V. Dhinakaran are now a spent force and may not be a threat for the AIADMK.

(The above story first appeared on LatestLY on May 02, 2021 07:34 PM IST. For more news and updates on politics, world, sports, entertainment and lifestyle, log on to our website latestly.com).