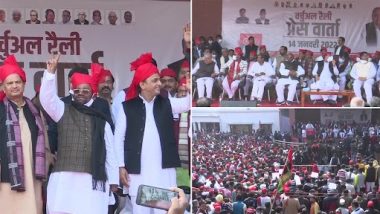 The five BJP MLAs who joined the SP are Bhagwati Sagar (Bilhaur in Kanpur), Roshanlal Verma (Tilhar in Shahjahanpur), Vinay Shakya (Bidhuna in Auraiya), Brijesh Prajapati (Tindwari in Bahraich) and Mukesh Verma (Shikohabad in Firozabad). Chaudhary is MLA from Shohratgarh. They were given the SP membership at its office here.

The resignation of state Labour Minister Maurya had come as a jolt to the ruling BJP in poll-bound Uttar Pradesh. The developments appear to strengthen the SP's influence among the non-Yadav OBCs in the state, less than a month before the crucial elections that will also have an impact on the 2024 parliamentary polls. Uttar Pradesh is scheduled to have a seven-phase poll beginning from February 10.