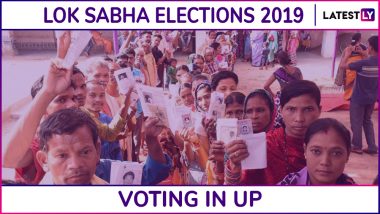 Lucknow, May 12: The phase 6 voting for Lok Sabha Elections 2019 in the 14 constituencies of Uttar Pradesh came to an end. The total voter percentage recorded on all the seats of Uttar Pradesh for phase 6 voting stood at 54.74 per cent, according to the Election Commission. The 14 constituencies where voting took place on Sunday, May 12: Sultanpur, Pratapgarh, Phulpur, Allahabad, Ambedkar Nagar, Shrawasti, Domariyaganj, Basti, Sant Kabir Nagar, Lalganj, Azamgarh, Jaunpur, Machhlishahr and Bhadohi. Uttar Pradesh Lok Sabha Elections 2019 Schedule: Constituency Wise Dates Of Voting And Results For UP General Elections.

Other than UP, all 10 seats in Haryana, eight each in West Bengal, Bihar and Madhya Pradesh, four in Jharkhand and all the seven seats in Delhi went to polls on Sunday, May 12. Sultanpur Lok Sabha Constituency in Uttar Pradesh: Candidates, Current MP, Voting Date.

The fate of 979 candidates are at stake in the sixth phase of Lok Sabha elections. The Election Commission has set up 1.13 lakh polling stations for the smooth conduct of elections.

The key constituencies outside Delhi include Morena, Guna and Bhopal in Madhya Pradesh, Sultanpur, Allahabad and Azamgarh in Uttar Pradesh, East Champaran in Bihar and Hisar, Sonipat and Rohtak in Haryana.

In 2014, the BJP had won seven of the eight seats in Bihar, eight of 10 in Haryana, all four in Jharkhand, seven of eight in Madhya Pradesh and 12 of 14 in Uttar Pradesh. It had won all the seven seats in Delhi.

Only the seventh phase of voting, the last, will remain after Sunday's voting. The Lok Sabha Elections 2019, started on April 11, when the first phase of voting took place. The voting for final phase will take place on May 19, and the results are scheduled to be announced on May 23. About 900 million people will have voted in the Indian General Election, 2019.

(The above story first appeared on LatestLY on May 12, 2019 09:12 AM IST. For more news and updates on politics, world, sports, entertainment and lifestyle, log on to our website latestly.com).