Uttarakhand to Get Third Chief Minister in a Year, Satpal Maharaj and Dhan Singh Rawat Said To Be Frontrunners

In a fiasco which reached its crescendo in barely four months, Uttarakhand will get its third Chief Minister in one year. The incumbent Chief Minister, Tirath Singh Rawat met Governor Baby Rani Maurya on late Friday night and submitted his resignation. 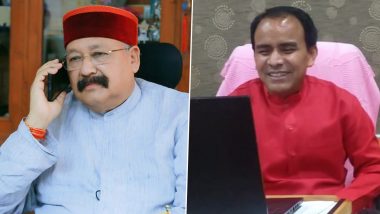 Satpal Maharaj and Dhan Singh Rawat are said to be frontrunners for next CM ( Pic Credit: Facebook)

New Delhi, July 2: In a fiasco which reached its crescendo in barely four months, Uttarakhand will get its third Chief Minister in one year.

The BJP legislature party will meet at 3 p.m. on Saturday to choose a new leader for which sitting MLAs, Satpal Maharaj and Dhan Singh Rawat are said to be frontrunners. The two MLAS were called to Delhi on Friday by the BJP central leadership.

According to reports, Union Minister Narendra Singh Tomar will be the observer for the legislative party meeting to be held at Dehradun.

What is not clear is how did this present imbroglio precipitate when there must have been an inkling that Assembly by-elections may not be possible less than 10 months before the state goes to the polls next year.

The scenario may have been in the spreadsheets when Rawat was sworn in as Chief Minister in March, with just a year to the Uttarakhand election, amid infighting fierce dissent against then Chief Minister Trivendra Singh Rawat.

Speculation about Rawat's imminent resignation has started last week with reports that the by-election would not take place.

To continue as Chief Minister, Rawat, who is an MP, needed to be elected to the Uttarakhand Assembly by September 10.

However, the Election Commission, which has faced criticism for holding elections in March-April amid the monstrous COVID-19 second wave, which was said to be one reasons for it flaring up, was not too keen.

Rawat has been in the news for the wrong reasons most notably being his comment on women wearing ripped jeans. He had also said the US, not Britain, ruled India for 200 years.

Rawat, who returned to Dehradun on Friday evening after three days in Delhi, where he had meetings with BJP chief J.P. Nadda and Union Home Minister Amit Shah, addressed a press conference, where it was speculated he could announce his resignation. However, he only talked about his government's achievements in the state.

He was supposed to meet the Governor on Saturday morning to put in his papers, but did so late on Friday only.

(The above story first appeared on LatestLY on Jul 03, 2021 08:45 AM IST. For more news and updates on politics, world, sports, entertainment and lifestyle, log on to our website latestly.com).